Leave room for the seal at Gonzales Beach, officials say

WATCH: As we hit a record-setting spring heat, a new sunbather is in town! And it’s surprising a few beachgoers. Kori Sidaway has the story.

An elephant seal is sharing Gonzales Beach with sunbathers and officials are reminding visitors to leave a bit of room for the animal.

The female juvenile elephant seal is shedding its winter coat. The moulting happens once a year for the species.

The seal at Gonzales Beach has been there for about a week and will likely stay for a couple more.

Local residents are finding it pretty special to be so close to wildlife in the city and say that people are pretty good about leaving the seal alone.

“It’s kind of scary because it’s one of the busiest beaches in the area. I just hope that people just respect its space,” says Devon Halabi, who lives in the area.

Kelli Ward, a BC SPCA volunteer, goes to Gonzales Beach three times a day to adjust the barrier and make sure the seal has plenty of room.

“It’s essential that the public stays away. If she feels threatened she may react. You don’t want to get bitten by an elephant seal,” says Ward.

The elephant seal seems docile and dozing but Ward warns she is frightened, she will move quickly.

“This isn’t Disney, it’s not a cute thing. This is nature and this is a wild animal, so people really need to respect that and really be grateful for this really wonderful opportunity to see wildlife up close,” says Ward.

And while the seal staying at one beach is an unusual sight to see, according to Ward, the humans are the intruders at the beach.

“They’ve been coming here for thousands of years. Long before people ever came here,” Ward says.

Fisheries and Oceans Canada is also reminding people to keep their distance and added that anyone who sees an animal being harassed or injured or an injured or a sick animal exhibiting highly unusual behaviour, is asked to call DFO?s Observe, Record and Report 24-hour hotline at  1-800-465-4336. 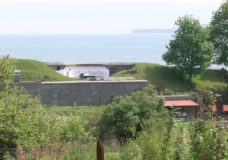 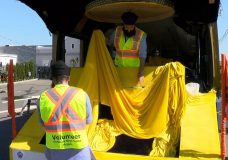