Posted: Jun. 9, 2020 6:55PM
CHEK
WatchA first-of-its-kind study to help squash the overpopulation of deer in Oak Bay is starting to see some results. For years the animals have been a source of trouble and controversy in the municipality.

Urban deer have been a headache in Oak Bay for years. But a unique project to help squash overpopulation of deers in the municipality appears to be off to a good start.

“The only fawns we’ve seen have been from our control group of deers. So that means they’re the does that did not receive the contraceptive” said wildlife biologist Alina Fisher

Back in September, Fisher and her fellow researches from the Urban Wildlife Stewardship Society began studying the population of the deer, in partnership with the municipality.

Sixty female dear were given birth control, while a control group of 20, tagged with pink collars were left alone. So far, the birth control has worked perfectly, but Fishers says despite the positive results, people are still confused and upset.

“Because there have been some fawns that people are upset because it’s not effective and was a big waste of money. But to prove that it is the immunocontraception that’s effective, we need to have a group of dear that we’re not treated with it so we could make direct comparisons.”

“At the end of the day  we’re doing this to reduce the number of deer and if it’s effective then that’s great it means we can move forward with it.”

Hidden cameras have been set up around the municipality to capture images of deer to help track the numbers. If any members of the public are able to capture a photo of the deer, they’re asked to send it with an address and time stamp to info [at] uwss.ca.

If the project continues to produce positive results, it’s believed other municipalities could jump on board. 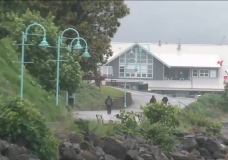 First half of June will see more rain, sunshine expected in second half