The lawyer for the Nuchatlaht First Nation, which wants the British Columbia Supreme Court to recognize its rights and title and put a stop to logging on the land it’s claiming, says the case is about reconciliation.

Jack Woodward told the court Aboriginal title was created through the merger of Indigenous and British legal systems in 1846, when the Crown resolved boundary disputes with the United States and claimed sovereignty over what’s now B.C.

He says the claim filed by the Nuchatlaht First Nation is about reconciliation and finding that balance between Crown and Indigenous legal systems, while recognizing the existence of Indigenous societies before colonization.

The lawsuit filed in 2017 asserts that the provincial and federal governments have denied Nuchatlaht rights by authorizing logging and “effectively dispossessing” the nation of parts of its territory on Vancouver Island’s west coast.

In a response to the claim, filed later that year, the province denies that the nation holds Aboriginal title over the area, which encompasses about 230 square kilometres of Nootka Island.

Lawyers for the B.C. and federal governments and logging firm Western Forest Products, another defendant, are expected to address the court later this week.

The nation’s chief at the time the lawsuit was filed said that the Nuchatlaht had spent many frustrating years at the treaty table and working through other government processes trying to protect its lands and the health of its people.

Woodward told the court on Monday the legal basis for claim is the test for Aboriginal title set out in the Supreme Court of Canada’s precedent-setting Tsilhqot’in decision in 2014.

That case recognized the Tsilhqot’in Nation’s rights and title over a swath of its traditional territory in B.C.’s central Interior, not only to historic village sites.

Woodward, who also represented the Tsilhqot’in in their claim, told Justice Elliott Myers that the Nuchatlaht Nation meets the test for Aboriginal title.

Evidence from experts on both sides of the lawsuit agree Nuchatlaht people were occupying and using the claim area before and during 1846, he said.

The nation wants a declaration from the court that recognizes its rights and title and nullifies the application of B.C.’s Forests and Parks acts in the claim area, he said.

Woodward said the area the nation is claiming avoids any potential conflict with neighbouring nations.

Several dozen people, including members of the Nuchatlaht First Nation, gathered outside B.C. Supreme Court in Vancouver Monday to mark the start of the trial, which is expected to last several weeks.

The land claim is the first to be heard since B.C. passed legislation in 2019 to align its laws with the United Nations Declaration on the Rights of Indigenous Peoples.

This report by The Canadian Press was first published March 21, 2022. 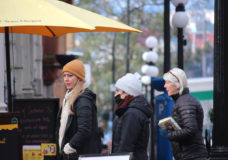 Eight COVID deaths over the weekend in B.C.; 506 new cases 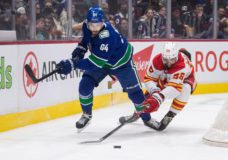