Outdoor walls are being brought to life in a big way in Nanaimo as artists transform grey walls with graffiti into head-turning pieces.

The large works of art are part of the inaugural Hub City Walls, Nanaimo’s mural festival underway that’s being put on by the Humanity in Community Foundation from Aug. 5 to 15.

Thanks to a grant from the City of Nanaimo and a pool of talented locals artists, the show went ahead despite COVID-19.  It’s on a smaller scale than originally planned yet three walls are still being transformed, along Cavan Street, in the Bastion Street parkade and on Front Street.

“I’m hoping more of this can happen now for the city,” said artist Russell Morland, who is one of three selected artists working on Hub City Walls.

“They can see there’s more positive images out there. And it’s been bringing so many people by, like so many people have been coming by and talking to me.

A group of tourists visiting from Vancouver stumbled on artist Kara Dee Harrison‘s work on Front Street on Monday and loved it.

“My daughter is an artist too so that’s why we always pay attention to all the art.”

Harrison said she is enjoying the interaction with the public that you don’t have in a closed studio.

“You never see people during the process,” said Harrison.

“Loads of people are like ‘oh I’ve walked by this wall a million times. And all of a sudden they pop by one day and say ‘where did this come from?'”

The murals will remain in place after the festival ends on Saturday. 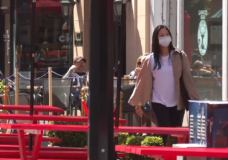 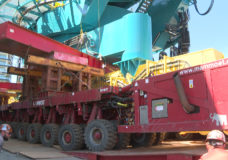