The newest vessels destine to join the BC Ferries’ fleet have entered the waters of the Pacific Ocean.

On December 24, the two Island Class ferries, being carried on board the Sun Rise transport ship, cleared the Panama Canal and have started making their way up the West Coast of North America.

The hybrid electric ships departed Constanta, Romania on November 20 on the semi-submersible transport vessel with the journey slated to take approximately 40 days to arrive on Vancouver Island. Now 37 days into their journey, the two ships are in the home stretch as they head towards Point Hope Maritime in Victoria, where they will undergo a final inspection.

A timelapse of the Sun Rise, along with the two hybrid ferries, heading through the locks of the Panama Canal can be watched here.

The two ferries are labeled as ‘Island Class,’ meaning they are battery equipped for full electric operation. The new designs will also have hybrid capabilities that will be used until shore charging infrastructure is installed.On the BC Ferries website, it outlines that the new Island Class will carry 47 vehicles and 300-450 passengers and crew. Other key features will include twin propellers to reduce underwater noise, an exhaust system that reduces emissions, a heat recovery system that uses waste thermal energy, and LED lights. According to BC Ferries, the boats will also be fully accessible without elevators.

The BC Ferries have also said that on top of the two incoming vessels, they will be deploying four more by 2022. Written on the BC Ferries website, it says “the Island Class ferries are part of our move towards standardizing our ferry fleet.” The company suggests that these new ships will help produce a more consistent customer experience while providing flexibility during unexpected challenges and lower costs for maintenance and training purposes.

The hybrids will be deployed on the Powell River – Texada Island and the Port McNeill – Alert Bay – Sointula routes.

Customers can continue to track the progress of the ships’ journey at vesselfinder.com 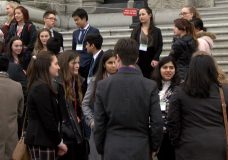 BC Youth Parliament gather for 91st session at Legislative Assembly