HALIFAX — A Nova Scotia man whose sex abuse convictions were quashed by the Supreme Court of Canada is being sued by six complainants who say he inflicted a lifetime of emotional harm.

A statement of claim was filed against Ernest Fenwick MacIntosh in the Supreme Court of Nova Scotia in Port Hawkesbury on Monday.

Each complainant is seeking $300,000 in general and aggravated damages; special damages of an amount to be determined; and $50,000 in punitive damages against MacIntosh.

In 2007, MacIntosh was extradited from India to face charges in Canada of indecent assault and gross indecency in connection with allegations he sexually abused boys in Cape Breton in the 1970s.

He was convicted in two separate trials of molesting four boys in Nova Scotia, but the convictions were quashed in April 2013 by Canada’s top court because his Charter right to a speedy trial was violated.

The court document says MacIntosh was a prominent businessman and community leader in Port Hawkesbury who “abused his position of trust, social status and wealth to repeatedly abuse the plaintiffs.”

The six complainants, who range in age from 56 to 64, say MacIntosh is liable for sexual battery, false imprisonment and intentional infliction of mental injury — allegations that have not been proven in court.

In an email, Daniel Naymark, one of two lawyers for the complainants, says the claim was personally served against MacIntosh at his Montreal home.

MacIntosh, now in his mid 70s, was arrested in Nepal in 2014 after he allegedly lured a nine-year-old boy to a hotel for sex. He was convicted of sexual abuse in that country and sentenced in 2015 to seven years in prison.

He was released last year and sent back to Canada.

It’s not clear whether MacIntosh has filed a statement of defence. 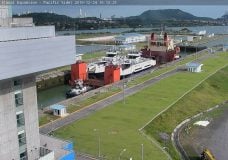