WATCH: New housing start numbers are out and show a boom in condo building on the West Shore, compared to other core municipalities. Luisa Alvarez spoke to experts who credit lower land costs and municipal policies in the area for the boom.

Across the West Shore, there are signs of residential construction everywhere.

But while builders used to concentrate on single-family homes there’s been a shift.

“Land prices have been increasing even out there so multi-family is where you get your affordability,” Executive Director of Victoria Residential Builders Association Casey Edge said.

According to CMHC data between January and April of 2018 Colwood and Langford saw a big boost in multi-family construction. There were 235 multi-family projects in the two communities for all of 2017.

This year so far a combined 387 units have already been built.

“The West Shore and Langford have identified that’s where the biggest need is so they?ve been going ahead with those permits and building those more affordable housing units as well as rental apartments to meet that demand, Saanich, and Victoria has some catching up to do,? Realtor Sean Burns said.

And the numbers agree in Victoria and Saanich combined there were 106 multi-family units built last year, this year 195 have been constructed.

“The West shore especially Langford has always been about affordability we also need efficient permit processes Langford and the West Shore lead in that,” Edge said.

“I think Victoria and Saanich should look towards new leadership on their councils that are oriented towards densification in a smart way that will create more affordable housing options for people as opposed to a top-heavy approach from just the provincial government,” Burns said.

But builders say even the West Shore boom could be slowed by government policy.

?It?s not even legislation yet and we know of projects that have been cancelled as a result of the speculation tax there are other taxes too that increase the cost of home-ownership and rental and not lower it,? said Edge 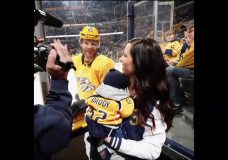