The Nanaimo RCMP has revealed that it is treating the discovery of the body of a missing female earlier this month as a homicide.

Police say that officers found the body of 27-year-old Amy Watts in the vicinity of Albert St and Victoria Crescent, located in a small wooded ravine. The body was found back on June 3.

Watts was reported missing by her mother — who lives in PEI — on Thursday, May 27 after she hadn’t made contact with her family since February.

“I want people to know that Amy was an amazing strong, courageous, beautiful soul. She was loved. She was loved by her family, her grampy was one of her best friends,” said Watts’ Mother, Janice Coady.

Since her body was found, the Nanaimo RCMP Serious Crime Unit has taken overall responsibility for the investigation.

“This is an aggressive investigation. We have a number of investigators assigned and they’re doing what they can to move this investigation forward,” said Const. Gary O’Brien.

Nanaimo resident Sara Ladret remembered Watts Wednesday, as an understanding outreach worker, who helped get her off the streets.

“I think more than anything else, she wanted people to see where she had gotten and not follow,” said Ladret who last saw the victim alive two weeks ago.

To date, no arrests have been made.

The investigation remains open at this time.

“She didn’t deserve to hurt or be hurt like this. Or to be brutalized  in the manner she was. No woman does,” said Coady.

Wednesday night those who loved Amy Watts will gather at the downtown Nanaimo ravine where her life was taken, before Janice Coady travels back to PEI to take her daughter’s body home. 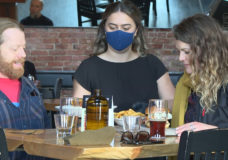