A motorist ended up jumping from a moving motorhome after its brakes failed Wednesday morning in Nanaimo.

The incident happened on Dawes Street, east of Stewart Avenue, and Newcastle Avenue at around 5:30 a.m. Wednesday.

Const. Gary O’Brien, media relations officer with the Nanaimo RCMP, said the motorist was driving eastbound on Dawes Street when the brakes on his motorhome failed.

“He started going down the road and he hit the brakes, but there were no brakes,” explained O’Brien.

The section of Dawes Street where the motorist’s brakes failed has a downward-facing slope that begins about 50 metres before the road reaches Newcastle Avenue, which is above an embankment that overlooks the Harbourfront Walkway.

“There is a pitch to the road and he tried the emergency brake but that failed,” said O’Brien.

At some point, O’Brien said the motorist realized he had no other options and jumped from the motorhome, which continued down the road.

“The guy thought the vehicle at one point was going to end up hitting a truck so he jumped out of the vehicle,” said O’Brien.

The motorhome continued down the road until it smashed into the guard rail.

“It took out the guard rail and the hydro pole,” said O’Brien.

Eventually, the motorhome came to a complete stop about halfway off the road on a grassy area over the embankment above the Harbourfront Walkway.

Brenda Henderson, a resident who lives on Newcastle Avenue, said the power was out for a few hours as a result of the incident, which she called “crazy.”

“He must have just seen the ocean when he was headed down the hill and he went through the stop sign and went over the barrier,” said Henderson, adding. “I think it’s just crazy. I can’t believe it.”

O’Brien said RCMP officers attended the scene shortly after 5:30 a.m. and that the motorist displayed no signs of impairment and is not facing any charges.

“This was a mechanical failure,” he said.

O’Brien also said the motorist is lucky to be alive and that the incident could have been far worse as the motorhome didn’t end up going over the embankment and falling onto the walkway below.

“He probably did the right thing by jumping out of the vehicle and saving his own life over saving the vehicle,” said O’Brien.

As for the motorhome, O’Brien said it suffered heavy damage and was towed from the scene. 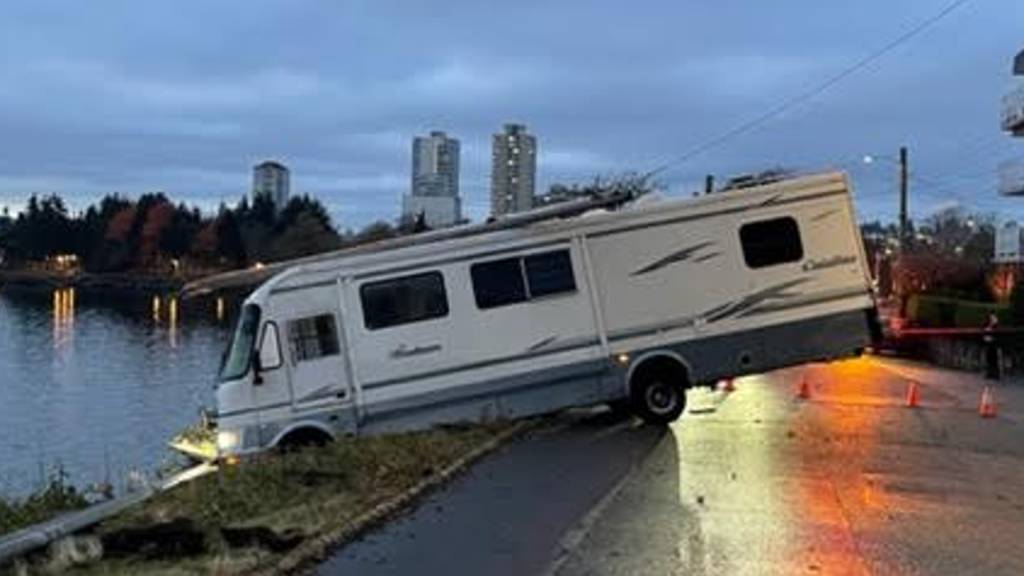 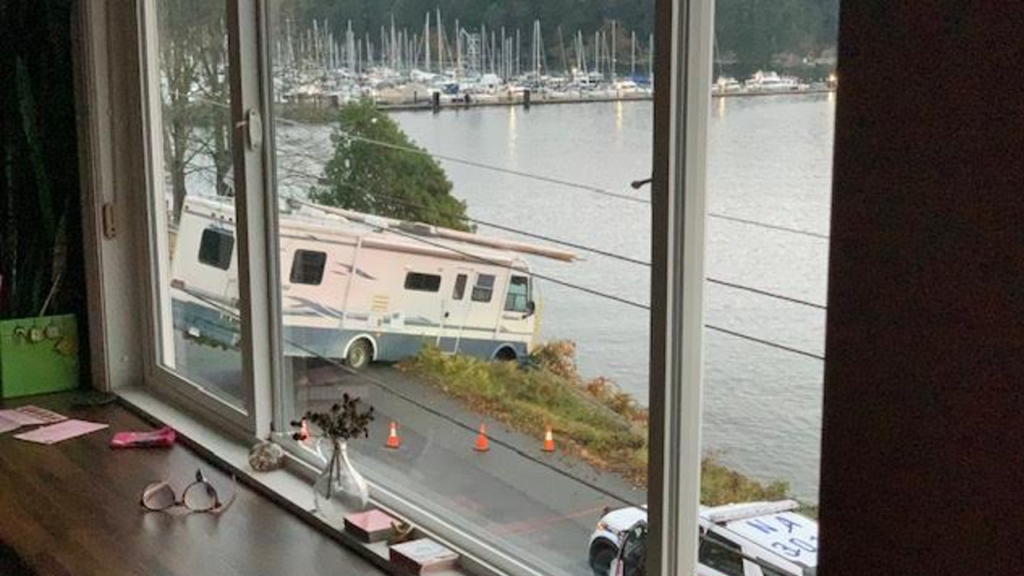 A motorist who ended up jumping from a moving motorhome after its brakes failed Wednesday morning in Nanaimo is lucky to be alive say RCMP. (Photos submitted to CHEK News) 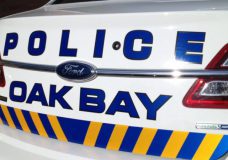 Investigation underway after $15,000 in eyewear stolen from Oak Bay store 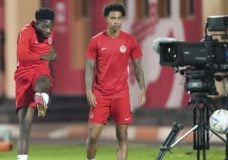