A Nanaimo couple helped to catch an alleged thief after he returned to the scene of the crime.

Their son’s bike was among the things taken and when the accused walked by the same home just hours later they recognized him from their surveillance footage.

They then proceeded to capture some of what happened next on their cell phone.

Nanaimo resident Cindy Cooper noticed her surveillance system had recorded a thief taking some things from their 5th Street property at 3 a.m. Sunday, including the suspect taking their 14-year-old son’s second-hand bike.

“It was a great bike for him and quite expensive as far as we know and yeah he was saving up to fix it,” said Cindy.

Having noticed the recording on the surveillance system shortly after the incident took place, Cindy’s husband got into his vehicle and drove around the neighbourhood hoping to find the thief without luck.

Then a couple of hours later Cindy opened her curtains and saw the thief walking beside their house without the bike.

“His clothing, everything he had on, was very distinct and so as soon as I saw him walking I knew exactly it was the same guy,” said Cindy.

Her husband Randy started to follow him on foot and Cindy got into her car and called the police.

“He was getting pretty angry with me following him and confronting him. He pulled out what was a multi-tool with a knife on it and kept walking and swearing at me,” said Randy Cooper.

“The police officer on the phone said not to follow so Randy just kind of went around and went down the tracks and caught up to him there so it was kind of a cat and mouse game and he just followed him,” said Cindy.

“They did everything right what we want people to do. You never want to go into harm’s way but they don’t want the person to get away so the husband followed at a very safe distance and in fact, the wife followed in the van behind her husband,” said Cst. Gary O’Brien, with Nanaimo RCMP.

The suspect is now facing a theft charge and police released him on a promise to appear in court in June.

Just over a year ago, another Nanaimo thief got caught when he was captured on surveillance footage stealing a tire before going to get them swapped by the victim’s mechanic. 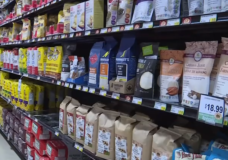 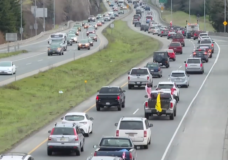