April 18, 2021 updated
CHEK
WatchChakalaka Restaurant and Market has been ordered by Island Health to close temporarily after management failed to create a COVID-19 Safety plan, which violates orders set out by the provincial health officer.

A Vancouver Island restaurant has been told to close after it failed to follow provincial health orders around COVID-19 safety protocols.

Chakalaka Restaurant and Market has been ordered by Island Health to close temporarily after management failed to create a COVID-19 Safety plan, which violates orders set out by the provincial health officer.

Island Health is now seeking a court-ordered injunction set to be heard in Victoria on April 23.

It’s the fourth foodservice business Island Health has ordered to close temporarily due to non-compliance with COVID-19 related orders since June.

However, the co-owner of the business says they’re doing nothing wrong.

“Those people that think that they have jurisdiction came here and scared our staff so right now we don’t have staff. Staff is my wife and I and they created that and that is a trespass by itself,” said Dick Deschamps.

“Everyone else has to comply,” said neighbour Nicole Irvine. “How is it fair that they get to continue to do this?”

Complaints regarding Chakalaka’s business practices go beyond COVID, according to Island Health, which says its inspectors have visited the property numerous times since September of 2020.

“They trespassed and we asked them to leave,” said Deschamps.

However, Island Health says it found RV hookups for drinking water and sewage disposal in violation of the Drinking Water Protection Act.

The health authority says there still hasn’t been compliance on this issue either despite multiple visits.

Neighbours say the RVs now numbering more than 20 have brought a lot of extra traffic, speeding vehicles and even drug trafficking.

“I want to be able to go outside and not worry about my daughter being hit by a car,” says Irvine, who wants the RVs gone. 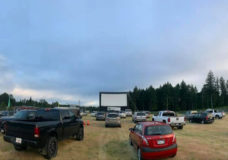