Photos of hate graffiti in downtown Victoria are popping up on social media.

On Wednesday morning, Ravi Kahlon the MLA for North Delta, shared a photo of a black swastika that appears penned on a wall.

Kahlon says the symbol was spotted by his friend outside their downtown door this morning. He says the photo was taken along Pandora Avenue near Chinatown.

A friend of mine woke this morning to this outside of her door in downtown #VictoriaBC Scary stuff. ? pic.twitter.com/ajWegVvKLq

“We are disgusted by this act of antisemitism and encourage the victim to contact us online or call at 1-800-892- BNAI. We are happy to help in anyway possible. Your friend should also reach out to police if they have not already done so,” the group wrote.

We are disgusted by this act of antisemitism and encourage the victim to contact us online or call at 1-800-892- BNAI. We are happy to help in anyway possible. Your friend should also reach out to police if they have not already done so.

Hours later, another photo was shared on Twitter showing what appears to be graffiti swastikas penned on the heads of three piglets. The piglets are part of a bus stop advertisement.

According to the Twitter user who posted the photo, the bus stop is located outside the Hudson market on Douglas Street.

The same user tweeted a photo of another bus stop advertisement showing a woman’s face with a black swastika on her cheek.

Bowen Osoko with Victoria police says, “Instances of swastika and other hate-symbol graffiti are understandably concerning. Both our hate crimes investigator and our graffiti investigator are aware of similar incidents in Victoria and Esquimalt.”

According to Osoko, increases in graffiti-based mischief files were discussed last night at a Victoria and Esquimalt Police Board meeting.

“While most of these files do not involve hate symbols, we have seen a significant increase in graffiti over the last six months,” he says.

Victoria police did not receive any calls for the swastika graffiti seen in downtown Victoria Wednesday but asks that anyone who discovers these types of incidents to report it to police. 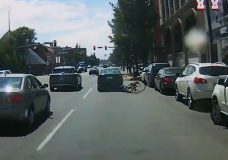 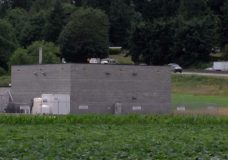