WATCH: A mucky mystery is unfolding in Sooke after homes and cars in a trailer park are covered in a sticky, poop-like substance falling from the sky. Tess van Straaten reports.

Vaughn Munro’s lived in the same mobile home park for 20 years but he says he’s never seen anything like this.

“The only way I can put it is effluent or something dropping on our vehicles, literally all day long and night,” says Munro.

Residents at the Kendall Trailer Park say it started about a month ago. The brown, sticky substance is almost continuously falling from the sky, coating their homes, cars and windows with blotches that are very hard to get off.

“It’s on there like cement,” explains Munro. “I had to scrub it down with bleach, soap and a bristle scrub brush and then pressure wash it to get it off. You just gotta scrub the heck out of it to get it off of it, It’s sticky and it’s just gross.”

They describe it as poop-like substance and they say there’s no way it could be birds — there’s just too much of it.

“I kind of assumed it was birds to begin with but no, it’s gotten so bad, it couldn’t be birds,” says resident John Cook. “It’s coming out of the air, it’s coming in the wind and I’m not sure what it is but it’s just covering everything.”

Concerned residents say the only logical explanation is that it’s coming from the District of Sooke’s wastewater treatment plant, which is right beside the park.

“The direction it’s coming from is the direction our sewage plant is and that side of the park is the worst-hit,” says Vaughn. “I’m not trying to point any fingers. We just want to know what’s happening.”

No one from Sooke was available for an on-camera interview but mayor Maja Tait says they’ve confirmed the mucky mess is not coming from the treatment plant.

Tait says they don’t discharge into the air and she say’s she’s as stumped as everyone else about what could be causing this.

Similar situations in May and June saw feces falling from the sky, landing on several cars in Kelowna and Vancouver. At first, it was believed to be from a passing plane but Transport Canada’s since determined it wasn’t lavatory waste. It’s still not clear what it was.

Back at the Sooke trailer park, people just hope the mystery is solved soon as they can’t even sit outside without it landing on their skin.

“I don’t care where it’s coming from — I just want to know what it is!” says Vaughn.

The B.C. Ministry of the Environment and University of Victoria researchers are being brought in to try and determine what it is. 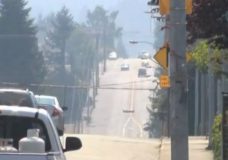 Get ready for a hot weekend on Vancouver Island 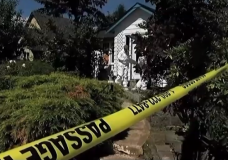 Vancouver Island Homicides Pt. 2: Why are police so secretive?