February 26, 2021 updated
File Photo
The fish farming company says it had to comply after the federal government ruled all fish farms in the Discovery Islands must close in 2022.

The MOWI Big Tree Creek Hatchery, south of Sayward, is a sprawling property that underwent a multi-million dollar expansion in 2017, but instead of growing fish, Thursday saw the last of 920,000 young salmon euthanized.

“I’m not in the business of killing healthy fish and these fish are healthy, they are disease-free. They have good welfare and to see them go this route is exceptionally hard,” said MOWI Canada West Veterinarian Terra MacDonald.

MacDonald says there was no other choice but to cull the salmon because they were destined for fish farms in the Discovery Islands that are no longer allowed to take any new fish.

MOWI currently has eight sites that are still stocked with the closure date on the horizon, outlining that they will have to close between 14 and 16 farms.

Company officials say Minister Jordan has yet to provide orders on specific locations.

“I take an oath when I leave school to protect the interests of all animals and if I imagined this was harmful if I saw compelling evidence that fish farms are harmful to wild salmon I wouldn’t be here,” added MacDonald.

Company officials say they should have been given more time to grow the fish to maturity.

“If you look at these fish, yes they’re only 100 grams right now but when at the harvested weight and sent to market there are about 14 million meals here and I’m a firm believer that we’re taking the pressure off wild salmon by farming,” said Big Tree Creek Hatchery Manager Chris McNeill.

It’s an argument that falls on deaf ears, however.

“BC wild salmon just don’t have the luxury of time anymore,” said Bob Chamberlin, Chair of the First Nation Wild Salmon Alliance. “When you consider some of the river systems in the Fraser that have normally produced a lot of fish, one had 11 fish come back, another had 120. We’re at a point of extinction.”

Fish farm companies have been encouraged to move operations to land-based farms, which they say aren’t yet sustainable.

Chamberlin says if they don’t evolve, they will become obscure.

“Fish farm companies are operating in a 1980’s model, 40 years ago and it’s time to evolve just like any other industry has,” he said.

Mowi and Cermaq Canada have now gone to court trying to overturn the government decision. 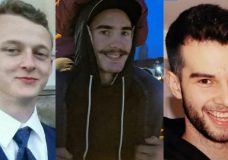 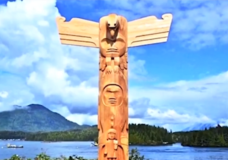 Vancouver Island First Nation asks why most members are unvaccinated