A mountain biker was airlifted to a Victoria hospital Wednesday after being struck by a car on the gravel portion of Bevan Road in Cumberland.

The Cumberland Fire Department, along with RCMP and BC Ambulance, responded at around 11:24 a.m. Officials say a man was riding his mountain bike on the section of Bevan Road north of the landfill when he was hit by a car. Both the driver and the cyclist ended up in the ditch.

The patient was airlifted to a Victoria hospital with multiple broken bones and lower body injuries.

Officials say a preliminary investigation indicates dusty road conditions may have contributed to the crash.

“It looked like the person was passing a gravel truck and then saw the bike and couldn’t maneuver around the bike and hit the bike and slid together, I think it looks like off the road,” Cumberland Fire Chief Mike Williamson said.

“The bike was busted completely in half.”

The section of Bevan Road was closed for several hours as police investigated. There is no word yet on any charges. 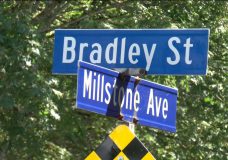 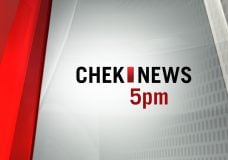