WATCH: As work continues on the much anticipated McKenzie interchange project, some neighbours say the repeated drilling and blasting has damaged their home. Isabelle Raghem reports.

The Stefanova family says construction for the Mckenzie Interchange happening about 400 metres away, has left marks on their Saanich home.

“This should be flat,” said homeowner Lyubomir Stefanova, pointing at bumps in the shingles of his home.

There are cracks on the ceiling of his kitchen and bedrooms, and on almost every wall.

“It’s not just something that can be fixed because it doesn’t look good, there’s also a lot of structural things going on, which is quite a bit of a worry,” said Lyubomir’s daughter Mira.

Since drilling began in fall 2016, they’ve noticed cracks and gaps that weren’t there before. Especially in recent months after a series of blasting.

“The kitchen is structurally moving. The counter top is actually raised on one part because it has come so forward,” added Mira.

The impact has been significant for many Saanich residents who have been dealing with much of the overnight work for over a year.

“Basically you’re living in tremours, we jump out of our seats thinking oh my gosh is this the earthquake,” resident Stacy Rumsby told CHEK News on Jan. 15.

In a statement, the Ministry of Transportation says it is aware and has been in discussions with a resident who has raised concerns about damage, potentially related to blasting on the McKenzie interchange project.

It encourages affected residents to submit claims on their website.

The Ministry added, “For every project that involves drilling and blasting, pre-blast and post-blast condition surveys are undertaken of all wells, structures, roads, and municipal services within a pre-specified distance of all significant vibration sources to determine ?before and after? conditions.  As well, before blasting begins, a blasting plan is reviewed which sets maximum vibration levels allowed, based on the distance to nearby structures.”

Mira is still concerned and does not feel optomistic.

“It isn’t really a guarantee whether or not that’s gonna work, and [the project manager told us] we can’t do anything until the project is done, which is in two years. What if my home falls in two years?” she said 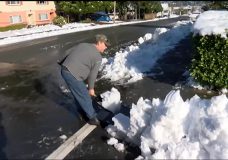 Vancouver Island snow to be followed by storms