Posted: Jan. 29, 2020 6:37PM
CHEK
WatchA thief targeted some maple trees in Saanich's Mount Douglas Park earlier this week. The culprit tapping into at least three trees over several days. Jasmine Bala tells us what the thief was after and why they weren't very successful.

At least three maple trees in the park have several holes in them, with multiple blue tubes attached to white 18.9L buckets sitting at the bottom of the trunks.

Darrell Wick, president of the Friends of Mount Douglas Park Society, received three reports of someone tapping the trees over the weekend.

“One of the persons that discovered them took me here, led the way, because I never could have found it myself, and bingo there it is,” he said. “I was quite shocked at the number of taps in this tree…big bucket looked like almost a professional job.”

When Wick saw the four taps in one of the trees, he was disappointed.

“It’s kind of sad that someone would do that,” he explained, adding that actions like these make it difficult to preserve the park.

The thief would have had to walk off the path and trample through the underbrush to get to the maple trees. It’s especially harmful to do at this time of the year, Wick said, as the ground is wet and soft.

“People don’t realize [that] when they do that, things will no longer grow there anymore,” he explained.

Stealing the sap from the trees is against Saanich’s bylaws.

“We ask that our park visitors leave no trace and only take photos and memories with them,” the district said in a statement to CHEK News. “Removal of park vegetation can result in a fine in accordance with our bylaws.”

A ticketable offence under the bylaw is upwards of $100.

As of Wednesday morning, however, the equipment was gone, and all that was left were holes in the trees. Saanich staff said they don’t know who removed it.

Wick said his guess is the thief heard the news about the fine and removed his tools before the district could confiscate them.

But it turns out the thief wasn’t very successful. When Wick looked into the big, 18.9L bucket before it was removed, it was nearly empty.

“I didn’t see anything in the bucket,” Wick said. “I think tapping maple trees is a dream here.”

Maple trees are usually tapped in Eastern Canada, in places like Quebec.

Saanich Park staff hope to fill the holes left behind by the thief to prevent the tree from bleeding sap as the weather warms up. 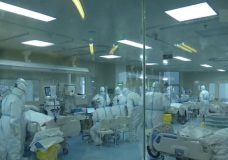 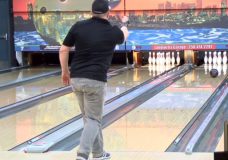