Man with hatchet breaks into RV in Courtenay, holds off police for three hours

Barry Boguski and his wife were sleeping in their Urquhart Avenue home near 21st St. in Courtenay early Saturday when they heard someone inside their travel trailer.

The RV was parked in their driveway just two metres from their bedroom window.

“About 3 a.m., my wife and I were awakened by some noise outside our bedroom window,” said Boguski. “He gained access through a side window and he had a hatchet on him.”

Boguski called 911 and soon multiple RCMP officers were there with a police dog, but the man would not come out.

“They were negotiating with him, they wanted him to drop his weapon and come out peacefully but the individual didn’t want to do that,” added Boguski.

As police talked to him from outside, the man is alleged to have vandalized the interior of the trailer.

According to Comox Valley RCMP, a hatchet was used to smash holes in the wall and bathroom door, the fire extinguisher was sprayed throughout the interior, a knife from one of the drawers was put through the trailer door and the roof vents were smashed as well.

Officers also sprayed him numerous times through the windows with pepper spray leaving red liquid on the walls and ceiling.

Police say it appears the man also tried to set the trailer on fire with a BBQ lighter.

“We just purchased this trailer two weeks ago after looking for the last six to eight months to find the right one for ourselves but we haven’t even used it yet,” Boguski said. “We had planned to take our kids and grandkids out next week for the first time.”

It took three hours before police were finally able to drag the man out of the trailer through the same emergency window he’d broken into.

It’s believed the same suspect had been involved in some kind of altercation requiring police to attend hours earlier at a warming centre for the homeless on Cliff Avenue in Courtenay.

“I don’t know for sure but it probably has something to do with the homeless, right or wrong and that I can see has become a huge problem, not just here, everywhere and something has to be done sometime to address it,” said Ross Dingwall, who lives next door to Boguski.

“At the end of it when they did have the individual out here on the lawn his comments to the RCMP were ‘that was a pretty good fight eh boys’ and he started to laugh,” said Boguski. “And we found that really disturbing. It’s disappointing when we’re just trying to lead a normal life.”

He has insurance but is worried about how much it will cover in what is currently an inflated market for everything from used trucks and boats to RVs.

The suspect has been remanded in custody until his next court appearance on May 26. 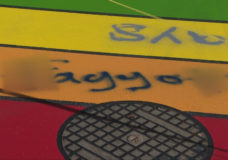 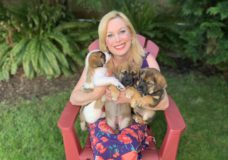