Prince Philip, the Duke of Edinburgh and husband of Queen Elizabeth II, died on April 9 at the age of 99.

Married to the Queen for 73 years, he is the longest-serving royal consort in British history.

Born in 1921 into the Greek and Danish royal families, Philip joined the British Royal Navy in 1939 and corresponded with Elizabeth during the war.

The two married in 1947 and Philip left military service after Elizabeth became queen in 1952.

Over the decades, Prince Philip would visit Victoria a total of seven times.

Then a dashing young Duke of Edinburgh, Prince Philip made his first official visit to the B.C. capital in 1951 with a then-Princess Elizabeth, a year before she would ascend the throne.

His next visit to Victoria was in 1954, as part of a solo trip to Canada.

A few years later in 1959, he returned, but this time with the Queen as part of a nationwide tour that saw them stop in every single Canadian province and territory.

The two would return to Victoria in 1971, where they toured parts of Vancouver Island in celebration of British Columbia’s centenary anniversary of joining the Confederation.

In 1987, the Duke of Edinburgh was honoured at CFB Esquimalt during a visit to the region, where he inspected the Royal Guard.

He would return again with Queen Elizabeth in 1994 for the Commonwealth Games in Victoria.

Prince Philip’s final visit was in 2002, as part of an 11-day tour of Canada with Queen Elizabeth, who was celebrating the 50th anniversary of her coronation.

He retired from royal duties in 2017, a few months before celebrating his 70th wedding anniversary.

With files from CBC News

B.C. not planning to announce new COVID restrictions on businesses on Monday: Dix 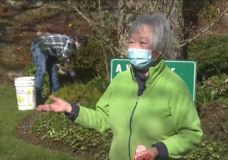