WATCH: It’s a swim that’s never been done before. Susan Simmons is training to swim across the Juan de Fuca Strait, twice, and may make history in doing so. Kori Sidaway has more on the local ultra-marathon swimmer who is swimming for a cause near to her heart.

Susan Simmons is planning on being the first person to swim across the Juan de Fuca Strait to the United States and back.

“It looks a little intimidating sometimes, you know,” says Simmons.

“The Juan de Fuca is one of the most amazing bodies of water in the world. I know it’s one of the most difficult to swim because of the currents and the tides, but when you’re in the middle of the strait, it’s such a fabulous feeling.”

And Simmons is no stranger to the strait. The 53-year-old swimmer set a world-record time for crossing the strait last year.

“I felt good coming out [last year]. I had a lot of energy and I thought let me try a double,” says Simmons.

But Simmons, who has multiple sclerosis (MS), says it’s not about the records.

“I pick the big stuff because I want people with MS to know that life doesn’t end with a diagnosis,” says Simmons.

She also uses the cold water exercise to keep her MS at bay, but it’s not without its struggles.

“It really hurts. If it’s extremely cold it almost feels as if you’re in Winnipeg,” explains Simmons.

But, her mantra, “just keep swimming,” is inspired by those who came before her – like Marilyn Bell, who swam the strait more than 50 years ago.

Susan will head out on her historic 60 km swim sometime in August, from Ogden Point to Dungeness Point and back. Swimming for herself, for others, inadvertently making history along the way.

“So I feel blessed that I’m able to do these things,” says Simmons. 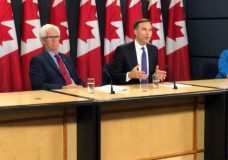