The search of the Happy Dover is part of an integrated Canada-U.S. Enforcement Operation. Kendall Hanson reports.

The Happy Dover arrived at 6:30 p.m. Wednesday evening and were met by the large contingent of officers, which included RCMP dogs.

“I have to say I’ve never seen an arrival receive that level of scrutiny,” Edward Dahlgren with the Nanaimo Port Authority said.

On Thursday, the RCMP presence remained high as the search continued.

“They’re just searching all the yachts and the sailboats right now for unnecessary stuff I think that has been brought over from overseas,” Jordan Grant, a longshoreman, said.

The Happy Dover is registered in the Netherlands and its last stop was Ensenada, Mexico before travelling to Nanaimo. It was originally scheduled to berth in Esquimalt but for some reason was rerouted yesterday.

“Quite often there’s scheduling conflicts with a cruise ship (or a) military ship requiring a berth and sometimes it’s just a factor of cost.” Dahlgren said.

He said moving yachts via ships has become more popular in the past decade so “owners don’t have to make long arduous journeys.”

Mounties say they weren’t expecting the port change either and had to scramble to Nanaimo.

Officers seemed particularly interested in a yacht and a catamaran aboard the Happy Dover but said they were searching the entire ship.

This is the first time the Happy Dover has stopped in Nanaimo but ships carrying yachts come to the city’s harbour about four times a year.

Nanaimo residents Echo Oliver and David Wark saw the Happy Dover arrive Wednesday night and are as interested as everyone else about why officers are searching it.

“Obviously if they think something is going on then they should be investigating, right?” Oliver said.

“We know the boats came from the Baja Peninsula which everybody knows is a major sort of route for certain things,” Wark said.

The RCMP says the search is part of a cross-border integrated enforcement operation called the Canada- U.S. Shiprider program.

Mounties still haven’t said what they’re looking for, or if they’ve found anything of an illegal nature onboard, but the search will continue Friday. 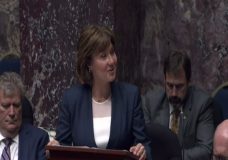 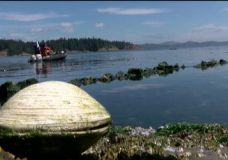