WATCH: What’s a birthday party without cake? A nine-year-old from Langford found out the hard way over the weekend when her cake was stolen at her birthday party. Luckily, the spirit of the community stepped up to make it right. Luisa Alvarez has that story.

It was supposed to be Eden Whitford’s a special day when she had her ninth birthday at Goldstream Provincial Park Sunday. It started off great with the kids doing a nature scavenger hunt.

“Basically we got to find bugs and hold bugs. It was really fun,” said nine-year-old Eden.

It wasn’t until after the bug scavenger hunt that things took a turn. Tthe kids were hungry and went to eat the birthday cake that was waiting for them back at the picnic tables.

“It was a white cake with chocolate icing and little roses all over it and it said ‘happy ninth birthday Eden,'” said Eden.

Eden’s mom Tracey Whitford said when they got back to the picnic table, everything was gone.

“Someone had stolen the cake, the food, the drinks even her number 9 candle. Everything was gone.”

At first, they thought it was a joke someone had played. But when they started searching the park, even the dumpsters, they quickly realized it wasn’t a joke.

The kids had to finish off the birthday party with veggies and oranges Whitford had in the car before heading home where Whitford went online to vent.

“I’m part of a mom group in the West Shore, here its called West Shore Moms, and I told them about it on there. I couldn’t believe a kids birthday party wasn’t even off limits,” said Whitford.

Eden got to choose how the new cake would be decorated, and even what the layers inside would be.

“It was a very nice unicorn cake with like a rainbow mane and it had a really nice colourful horn and sparkles in the ears,” said Eden.

Tracey saaid it turned out to be a really good teaching moment for her and her daughter.

With so much outpour of community love, Eden said she couldn’t believe it.

“It was really exciting and surprising that people would actually do that. Thank you very much it was really nice,” said Eden. 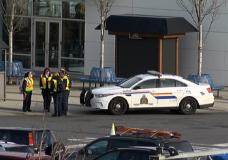 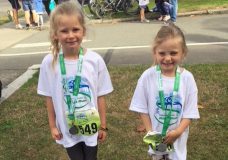