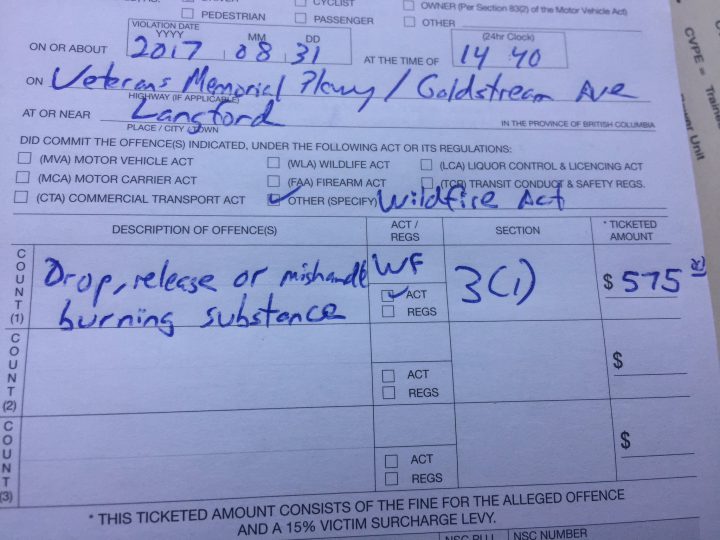 West Shore RCMP tweeted out this photo of a ticket after a unidentified driver tossed a cigarette butt out of a vehicle window. Credit: West Shore RCMP

A driver who was fined $575 for tossing a cigarette butt out of a vehicle window thought the ticket was “insane,” according to West Shore RCMP.

The ticket was issued at approximately 2:40 p.m. at the Veterans Memorial Parkway and Goldstream Avenue intersection in Landford, which is near the RCMP detachment. According to police, the unidentified driver received the fine for $575 under the B.C. Wildfire Act.

RCMP tweeted a copy of the ticket, saying that tossing a cigarette butt out of a window is “simply wrong and ILLEGAL.”

Cig butt out the window is simply wrong and ILLEGAL. Driver thought the ticket issued was "insane"… #yyj #bcwildfires pic.twitter.com/w5lK4EfWjy

Under the Wildfire Act, any individual who drops, releases or mishandles a burning substance can receive the fine. The ticket issued on Thursday comes as B.C. remains under a provincial state of emergency that was issued on July 7 following wildfires in the province’s Interior.

The 2017 wildfire season is the worst on record in the province, with more than 10,000 square kilometres of land burned. Since April 1, there have been 1,154 wildfires in the province and fighting the fires has cost B.C. $419.7 million to date. 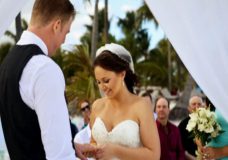 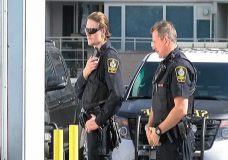