The remains of a fatal two-vehicle head-on collision on Tuesday litter the landscape near Lake Cowichan.

The crash at 8 p.m. on Tuesday night on Highway 18 on the road to Lake Cowichan.

“Our investigators have determined that one of the motorists was travelling eastbound while the other was travelling westbound. The westbound motorist encountered the elk and tried to avoid it. however, couldn’t.  And as a result of their collision with the elk, they then veered from their lane and struck the other vehicle head-on,” Sgt. Trevor Busch, operations support NCO for the Duncan-North Cowichan RCMP detachment, said.

A Lake Cowichan woman in her 60′ died at the scene. Two others, a man and woman, are in critical condition.

Then less than 12 hours later, there was another collision on Highway 18 just outside of Lake Cowichan involving an elk. The male driver was lucky this time and walked away from the crash.   But the mayor of Lake Cowichan says residents are now concerned about driving.

“They are everywhere. This is within the town of Lake Cowichan,” Peters said.

Peters says the number of elk in the Cowichan Valley is growing. With more elk, collisions are now a weekly occurrence.

“This time of year there is probably two to three incidents a week. They are moving this time of year, this is rut season, there are more,” Peters said.

Sgt. Scott Norris with the BC Conservation Officers Service says the signs posted along the island’s highway are a constant reminder to drivers to be “elk” aware.

“Elk, particularly at night, you can barely see them. And often you’ve passed them and don’t even know you’ve passed a lot of elk.  They blend into the darkness so well.  So keeping your wits about you, keeping your speed.  And just paying attention to the road,” Norris said.

A petition created Wednesday on change.org is asking the provincial government and ICBC for wildlife fencing to be placed along Highway 18. 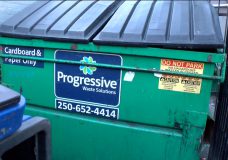 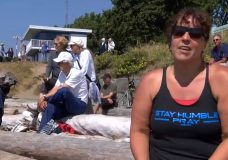