The aftermath of a costly act of vandalism looms over a Central Saanich farm.

“It was one of those moments where you just wonder why?” said Longview Farms General Manager Ryan Vantreight.

Vantreight, a fifth-generation farmer, received a message on Saturday night that no farmer wants to get.

“One of the concerned neighbours of the community gave me a text message saying hey by the way there’s two trucks stuck in your hayfield,” Vantreight said.

Vantreight quickly called Central Saanich Police, before making his way outside to find the field completely destroyed and three teenage boys scrambling to remove the trucks that were deeply embedded as an eccentric joyride was brought to a halt. But the damage had been done. The field, which normally produces 1,200 bales of hay, will now yield a significant amount less.

“This is a livelihood, this is private property, frame it any which way you want. It’s unfortunate that the young men involved didn’t have that in their minds before they entered the field,” said Vantreight.

As of now, no charges have been laid against either of the drivers, but Central Saanich Police say they are taking this seriously.

“What our investigator, main investigator will do, is he’s going to put together a report to crown council, well send that forward, he’s recommending charges of mischief to private property over 5,000 dollars,” said Central Saanich Police Service Deputy Chief Derren Lench.

“I think it’s important for our locals to understand that there going to be accountable when they start going on private land and causing damage,” added Lench.

“Farming is a big part of the fabric of Central Saanich.”

As of now, the damage is estimated at around $7,000 but with the number of hours and resources required to fix the damage, it will likely end up costing much more. 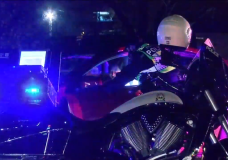