WATCH: It’s been almost a year since a well-known Nanaimo businessman died suddenly on a boating trip in Washington State. Ceilidh Millar reports.

When Tony Harris is asked about his father, he’s often at a loss for words.

“He was definitely a friend of the community and most people knew who he was,” explained Tony.

Many will remember the commercials that made Tom Harris a household name on Vancouver Island.

The beloved Nanaimo businessman, who owned multiple car dealerships and a mobile phone company, also had a Hollywood-size spirit for giving.

“From his early days in business, he always found a way to give back,” said Tony. “It was a cornerstone to his existence.”

Harris died expectantly after falling off a boat near Roche Harbour in Washington State last June.

More than 1,000 people attended his funeral which was held at the Vancouver Island Conference Centre in July 2017.

“From emergency first aid, all the way up to hockey teams, to supporting the local churches, there wasn’t anything that Tom wasn’t involved with,” said Mayor of Nanaimo Bill McKay in an interview with CHEK News in July 2017.

“It left a big hole for the family but also the community at large,” said Tony.

Harris’ family is hoping to honour his legacy by carrying on his commitment to giving with a charity golf tournament.

The family will be hosting the first annual Tom Harris Charity Classic at the Nanaimo Golf Club on June 15.

“My Dad didn’t really like golf, honestly, but he liked having a fun time,” explained Tony. “We have a lot of his old friends coming and different people from the community, so it’s going to be a great celebration.”

Proceeds raised from the sold-out event will be donated to the Tom Harris Community Foundation in partnership with the Nanaimo Foundation.

To learn more about the tournament, visit the event website. 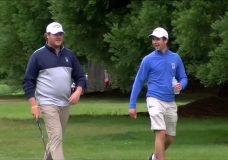 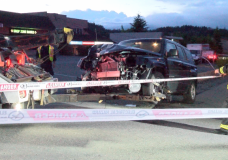