Due to the wet weather the Island has been experiencing, hay farmers are struggling to find an ideal window to harvest their crops.

In 50 years of farming, Frank Bajich says he’s never seen a hay crop grow so high on his Nanaimo farm.

Getting it off the field, and baled for animal owners who are desperate for feed has proven impossible so far. As this spring’s record-breaking wet weather in B.C. turns fields into marshes, and pushes the first cut of hay back weeks later than a typical year, and possibly by two months into July experts say, if a hot dry stretch doesn’t arrive soon.

According to Duncan-based horse rescue Humanity for Horses, the late haying has many horse owners running out of feed now and the shortage has raised hay prices by 30 to 50 per cent. So the rescue is now also receiving a concerning number of calls from owners unable to find or pay for hay, and who are trying to surrender their horses.

“We are getting messages and calls almost daily now where people want to surrender their horses. Today we had a call for two to be surrendered back to us,” said Rebecca Sanesh, founder of Humanity for Horses Rescue & Rehab.

“I’ve never seen anything like this year. We’ve never had this kind of shortage before and the farmers just can’t get it off the fields because it keeps raining,” said Dean.

So until another load of orchard grass comes in, her feed store has put a limit of five bales per customer.

“Just to get us through this week. Our hay buyer is down in the states right now, he’s looking for hay,” said Dean.

“And I just heard that Washington State they cut their’s and it all just got rained on and once that happens you lose your crop it goes mouldy,” said Bajich.

So hay farmers like Bajich, don’t want to make that same mistake, as an entire crop can be lost if it’s cut too soon and rain falls. Though the pressure to cut their crops during this growing shortage is putting more pressure on them by the day. 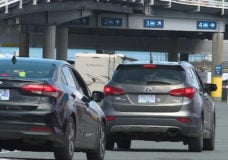 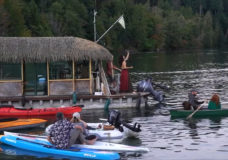