‘It’s going to be a frustrating weekend’: BC Ferries cancellations expected to continue as company struggles to hire

Crew shortages resulted in multiple BC Ferries cancellations over the weekend and as the Easter long weekend looms, some employees say the cancellations will continue.

“It’s going to get more difficult. We are expecting more cancellations than what currently has been announced,” said Glen, a BC Ferries crew member whose identity CHEK News is protecting.

“It’s going to be a frustrating weekend for passengers.”

The pandemic and a retiring workforce have resulted in crew shortages within BC Ferries, which are now leading to ferry cancellations.

“Crew levels are very low. The amount of relief is very low. And people are burning out,” said Eric McNeely, provincial president of the BC Ferry Marine Workers Union.

Heading into a long weekend and their busiest season of summer, BC Ferries is being forced to run a ‘modified winter schedule’, while trying to find a solution.

But Glen says, the salary BC Ferries is offering isn’t competitive.

“BC Ferries has a unique position because they an offer marine workers to go home every night from their job. However, BC Ferries also does not offer a competitive wage worldwide for mariners,” said Glen. “This has been a long-standing policy problem…and it’s finally causing problems in our fleets,” said Glen.

“We feel we do have a competitive wage and our benefit package. We do offer a pension and of course medical and dental,” said Marshall.

However, CHEK News confirmed with the BC Ferry Marine Workers Union that the starting salary for a deck officer at BC Ferries is markedly less than industry-standard — ranging from $70,000 to $100,000. On other vessels, the ‘conservative’ going rate is nearly double at $140,000 to $180,000, not including signing bonuses or retention bonuses that many other private companies are offering.

And both Glen and McNeely say the lower salaries BC Ferries offers is not only making it difficult for the company to recruit and hire, but is also causing a brain drain, especially when the world is contending with a global marine worker shortage.

“Yes, it certainly is. I was just talking to someone this weekend, they’ve been with BC Ferries for 15 years but they’ve just accepted a job with Seaspan predominantly because of the wage difference,” said McNeely.

Then there’s the lack of upward mobility, something the company typically prides itself on providing.

“We spend over 20 million dollars a year for training for employees,” Marshall told CHEK News.

But McNeely says BC Ferries is in such a tight spot, they don’t have enough relief crew to get the newly hired crew members the certification they need in order to move up.

“With the lack of crew it’s hard for people to take time off and take those certificates to replace those who are leaving,” said McNeely.

But possibly the biggest concern is that in the long-term, the staffing shortage problem will compound and eventually collide with a demographic shift described by McNeely as a ‘ticking time bomb’.

“Twenty-five per cent of my membership, that’s around 1,000 people right now, are over the age of 55 and have been with Ferries 25 years or more. They could retire at any time,” said McNeely.

In the meantime for this long weekend, be prepared for some possibly unpredictable long weekend travel ahead.

“If you’re traveling with BC Ferries this weekend definitely check our website before you head out, we do expect a very busy weekend, and please be patient with our staff,” said Marshall. 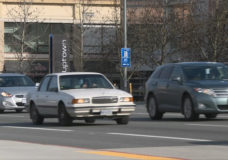 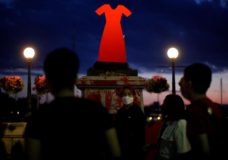