Posted: May 4, 2021 6:22PM
Skye Ryan/CHEK News
WatchThe real estate boom is sending waves of people to Port Alberni, as it's the most affordable of all centres on Vancouver Island. Home sales in Alberni and the West Coast rose over 300 per cent compared to a year ago.

When Heather Welsh and her husband moved from the U.K. to Port Alberni five years ago, it was a city still recovering from mill closures and forestry cuts.

However, they saw its potential and opened Alberni Brewing Company one month ago, counting on their gamble paying off.

“Getting the support of the locals has been, overwhelming. We’re so grateful in regards to when the business opened,” said Heather Welsh, Owner of Alberni Brewing Co.

The family is part of a growing wave of new arrivals to Port Alberni, and longtime resident Martin Watts said he understands why.

“It’s a steal of a deal. You look around here, the mountains, lakes,” said Martin Watts, who has lived in Port Alberni for 55 years.

New stats by the Vancouver Island Real Estate Board (VIREB) show the community that’s historically been the most affordable on Vancouver Island, is now hot property. Its benchmark price of $417,000 is hundreds of thousands less than other Island cities and people are seizing the opportunity.

Sales in Port Alberni/West Coast rose by 318 per cent from April 2020 to April 2021. In addition, home prices are up 20 per cent from a year ago as buyers venture west for more house and lifestyle for their money.

“It doesn’t surprise me that there’s a boom going on here,” said Welsh. “People are flocking to our community and I’m hearing everyday that they’re moving here by choice, they’re moving here for lifestyle. Affordability is a side benefit, but that gap is closing.”

According to the President of the VIREB, the surge out west is part of the furious buying across the Island.

“I don’t think anyone foresaw this in a pandemic or have ever experienced anything like this,” said Ian MacKay, President of VIREB.

The Welsh’s are looking forward to meeting their new neighbours who are arriving in a wave real estate experts say likely won’t slow down until at least 2022. 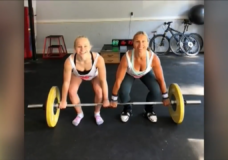