May 5, 2021 updated
CHEK
WatchWhen you think of mother-daughter activities, Olympic weightlifting might not be high up on the list, but that's exactly what Heather and Georgia Cameron have bonded over.

When you think of mother-daughter activities, Olympic weightlifting might not be high up on the list, but that’s exactly what Heather and Georgia Cameron have bonded over.

Starting with CrossFit the duo switched their focus exclusively to competitive weightlifting in 2014 and began training together.

“Georgia was training as a competitive swimmer, needed a change, liked the fun aspect of CrossFit and then played around with a barbell for a while and so then started working on her Olympic weightlifting,” says Heather.

“We both kind of transitioned to weightlifting at the same time, we both fell in love with that part of CrossFit and then competed together for a long time,” adds Georgia.

In fact, their training has become so serious during the pandemic that their garage has been converted into a personal gym.

“Over COVID my mom decided to clean it out and we slowly started converting it into this space that it is now,” says Georgia. “Having a home gym is awesome, I can just walk right out of my house and train.”

Now the former B.C. Provincial Champion is off to the Junior Pan American Championships in Columbia this June, but with the pandemic there are a few extra hurdles to negotiate.

“There’s a lot of things we have to look into, it’s not just booking a flight and go, but we’re working that all out and we’re hoping that it’s going to happen nice and safely,” says Georgia.

Regardless of the Colombia Trip, Cameron’s results have impressed her coaching team.

“I believe Georgia’s journey has just began and her talent and hard work will pay off for any years to come,” says Mirek Korkowski, owner of the Hercules Weightlifting Club.

Georgia’s achievements have also made for one proud mom and training partner.

“I’ve been her biggest fan since she started and you know what, whatever she wants to do or wherever she wants to go with this sport she’ll do well because she works hard and just really believes in what she does,” says Heather.

The Junior Pan American Championships run from June 7 to 11 in Manizales, Colombia. 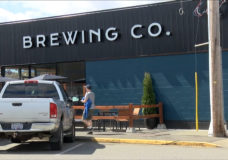 'It's a steal of a deal': Soaring house prices on Vancouver Island send buyers to Port Alberni

B.C. family mourns 57-year-old 'man of a million projects' who died of COVID-19