Island Health first in B.C. to train board of directors to administer naloxone

WATCH: Island Health is the first health authority in the province to train its board of directors to administer overdose-reversing naloxone. April Lawrence reports.

It was not Tracey Thompson’s typical audience for naloxone training, but on Thursday she was presenting to members of Island Health’s board of directors.

“I’d never done this before and in fact was probably a little bit nervous about partaking in the training,” said board member Robina Thomas.

Most are high-level business executives from across Vancouver Island and are getting a closer look at B.C.’s opioid crisis.

“The board decided that they really needed to understand the whole safe consumption issue and administering naloxone,” said Island Health board chair Leah Hollins.

More than 1400 people died from an overdose in B.C. in 2017 and while there’s a misconception the majority are from the streets, many on the board say they’ve been touched by the crisis as well.

“One of my cousins her best friend overdosed on fentanyl,” said Thomas.

“Here’s our board members, the individuals that are guiding our $2.2 billion organization, but when polled everyone almost everyone knew somebody who’d either experienced an overdose or even knew of a fatality,” said Island Health’s Chief Medical Health Officer Dr. Richard Stanwick.

“This was a very close personal friend, their son was actually a lawyer,” he said. “Eventually was found unresponsive and was not able to resuscitate and this was a young man who had actually stayed with us at one occasion so a bright young light extinguished because of overdose,” he said.

The members were taught how to draw naloxone into a syringe and then inject it into an orange, teaching them how to eventually treat a person.

“If I ever had to I would be so thankful that I had this training,” said Thompson.

They were not only taught how to inject naloxone but how to provide life-saving CPR and how to tell if someone is actually overdosing.

“We’re going to see slow or no breathing, snoring or gurgling sounds, that is not somebody sleeping it off,” said trainer Tracey Thompson.

The kits, that are free to the public, have helped reverse more than 17,000 overdoses in B.C.

You can find out how to get a free kit here. 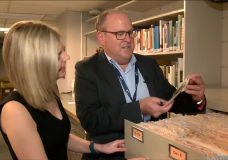 Victoria steps into the digital age with online archives database 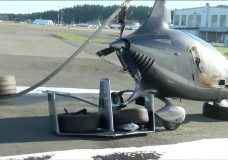