In the waters near Tofino, an alarming number of European green crabs are showing up in traps.

Temple has been seeing an increasing number of green crabs showing up in coastal waters.

The European Green Crab first appeared in western North America in San Francisco in 1989 thanks to shipping. Ten years later they were spotted around southern Vancouver Island and are now threatening fish and fish habitat as far north as the central coast of BC.

“Green crab are identified as one of the ten most destructive invasive species in the world and we’ve seen in the other areas where they’ve established site infestations a massive decline in the productivity of the habitat, particularly to do with wild salmon, so it’s very important here that we control these crabs before they establish any more of a population,” said Temple.

According to the Department of Fisheries and Oceans website, “The European green crab threatens molluscs, crustaceans and fish, because of its large numbers, its huge appetite and its fierce competition with other species. Unless controlled, this new aquatic invasive species will have a significant impact on biodiversity and habitat in the Canadian ecosystems.”

The DFO says the spread hasn’t taken hold on the east side of Vancouver Island yet and encourages people to report them if they see them.

“The primary concern with green crab is the destruction that they can do to eelgrass meadows that are important nursery areas for small pelagic fish like herring and juvenile salmonids,” said DFO Research Scientist Thomas Therriault, based at the Pacific Biological Station in Nanaimo.

“Throughout the coast of British Columbia, we need to have a much more industrial approach to control and management of green crab and that’s something we’re working with the Department of Fisheries and Oceans on right now,” added Temple.

First Nations on the coast are also very concerned.

“There were probably three to one green crabs to other ones today and that’s disturbing. We really want our First Nations fisheries to thrive,” said Joe Louie, a Tlaoquiaht First Nation Parks Liason. 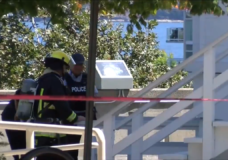 Passerby helps prevent Nanaimo's Bastion from going up in flames 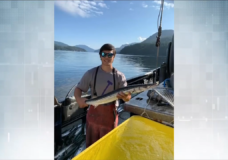 'It is rare:' Barracuda caught by fishermen in Alberni Inlet