‘I don’t have a lot of friends, but I have this town’: Sooke community helping each other through unique online group

Posted: Sep. 20, 2019 6:05PM
CHEK
WatchThere is a Facebook group that more than 30 per cent of Sooke's population belongs to. And its whole purpose is helping people who need it most. Whether it's lending a pair of crutches or fixing someone's car for free, Sooke Embrace shows what it means to be a community.April Lawrence reports.

Over the past three years, Sooke resident Helena Macaulay has found herself wrapped in an embrace—by her entire community.

“I honestly don’t think I would have made it this far if it wasn’t for this town,” she said.

Macaulay signed on to the Sooke Embrace Facebook group three years ago after a battle with cancer left her struggling financially and unable to pay her hydro bill.

“So I put out a post, it was one of the hardest things I ever did because I’m not one for asking for help,” she said.

Within a day, the bill was covered. Then earlier this year she posted another desperate plea.

Her daughter Brenda’s birthday falls just a week after Christmas and money had run out.

“Worst feeling for a parent is not being able to give their child a party,” Macaulay said.

But Sooke Embrace did it again, donating everything from birthday cakes, to decorations, to food. Nine-year-old Brenda was so thrilled she thanked the Facebook group in a video.

“I can’t even pick the right words, there aren’t words sufficient enough to express how grateful I am,” Macaulay said.

“I wouldn’t really classify it as helping it’s just they needed something I had it,” said Ferguson.

A semi-retired mechanic Ferguson estimates he’s helped 4-500 people on Sooke Embrace in just the last three years—repairing cars for free and handing out free lawnmowers. But convincing him to talk about his incredible generosity isn’t easy.

“I really don’t need stuff like this, interviews and all that to do what I do, it’s just something I want to do, I get enjoyment out of it,” said Ferguson.

And that’s exactly what the group is all about. Building community one kind gesture at a time.

“I don’t have a lot of friends, but I have this town,” said Macaulay. 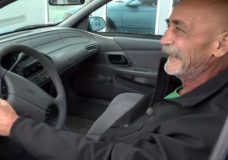 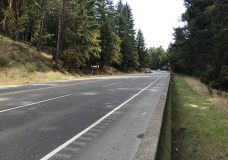