WATCH: Hundreds gathered in Metchosin Sunday to celebrate the life of councilor Moralea Milne. The 68-year-old was killed in a car crash in Surrey last month. Those at the funeral today say she was a pillar in the community, a champion for the environment and loved by all who knew her. Luisa Alvarez reports.

“Moralea loved this community and it was expressed in all that she did,” said Metchosin Mayor John Ranns.

And Sunday it was clear that her community loved her as well, hundreds were in attendance on the municipal grounds to Mourn the loss of Moralea Milne who was tragically killed in a car crash last month.

But more than mourning her Sunday those who knew her gathered to celebrate her life and all she contributed to her community.

“She was a mover and shaker and had her hand in almost everything in Metchosin,” said Kem Luther Co-Founder of the Metchosin bio-blitz and longtime friend.

She was a founding member of the Metchosin Foundation among other initiatives she spearheaded. Including the Metchosin bio-blitz, monthly walk and talks and organizing volunteers to help remove invasive species every Sunday morning at local parks.

The environment was at the forefront of everything Moralea did.

One of Moralea’s strongest statements during her years as Metchosin District Councillor was  “The environment is the lens through which I view every decision.”

It is with that in mind, that the Celebration of Life featured a range of environmental sensitivities.

All foods, napkins, cups, glasses,  were recyclable and compostable, and the municipal grounds were filled with wildflowers people picked including branches of Butterfly Bush to attract butterflies and moths native to the area.

“She was a serious custodian of this planet and I feel that I honored her by saying that and suggesting to the people that know her is what are we going to do now without Moralea and we can and we will,” said Moralea’s life Partner Dan Clemens.

Moralea’s death has left a huge void but her legacy will live on. She is being remembered by her daughters and those who knew her as a kind, honest, giving person who lived life to the fullest.

“My mother was the most honest person and she stayed true to her honesty throughout her life,” said Madeline Milne.

“I think to some extent Moralea was “she who must be obeyed” but it was done in such a charming way you didn’t realize you’d agreed to do something you hadn’t expected to do,” said Pratt.

The family has requested that, in lieu of flowers, donations be made to the Metchosin Foundation of which she was a founding member. 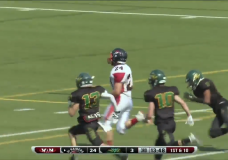 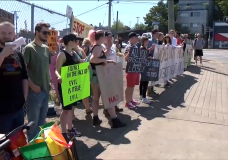