WATCH: About 1000 people gathered outside tent city in Nanaimo Sunday as the Soldiers of Odin marched to the homeless camp. But as Dean Stoltz reports, things got tense.

Under the watchful eye of police about 20 members of the Soldiers of Odin marched through downtown Nanaimo Sunday making their way to tent city.

“We’re not against the homeless people. I want to get them apartments not tents.” said the president of the Vancouver Island chapter who wouldn’t provide his name.

Hundreds of people were waiting for them at tent city, supporters who didn’t want the Soldiers of Odin anywhere near the camp.

The Soldiers of Odin were formed as an anti-immigration vigilante group in Finland in 2015. But the Vancouver Island members say they’ve cut all ties with the Finnish founders and say they’re not extremists, but those words were falling on deaf ears as people waited for them at tent city.

“They should be treated as they are,” said Paul Manly. “They’re fascist, their anti-immigration and their bigots and they need to be called out as such.”

When told that the local group says it has disassociated itself from the original group Manly said, “Then they should get a new uniform.”

The Soldiers of Odin were greeted by loud chants of “Soldiers go home” when they arrived at tent city.

The two sides mostly tried to yell over each other with a line of police in between but there were several closer face-to-face verbal clashes.

The Soldiers of Odin say they were really there just to make it safer for another group called Action Against Discontent City that wants to see tent city cleaned up and moved out.

None of those members made themselves known but there were dozens of supporters lined up behind the Soldiers of Odin as both sides took one side of the street outside the homeless camp.

“There is a huge hate group against the camp, their group is called Action Against Discontent City, I think that says it all,” said camp spokesperson Amber McGrath. “Now the soldiers of Odin have joined in and you know we don’t have patience or time for it.”

“They want disbursement of the homeless camp and I think in disbursement they end up not getting noticed and that’s the way it’s been for how many years, they’ve not been getting the help they need until it got to this crisis point.”

City Councillor Gord Fuller was handing out flowers at the march.

“We thought if we could get both sides to except flowers that it might tone it down a little bit,” he said.

Maybe it did work because not long afterwards a man who says he’s homeless but not living in the camp went over and shook hands with the leaders of the Soldiers of Odin.

“And we thought they’re against us but in fact they are standing with us,” said Jamison McGrath.

“Why are we still protesting then?” he was asked.

The march wrapped up about 45 minutes later and police made no arrests. 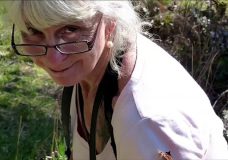 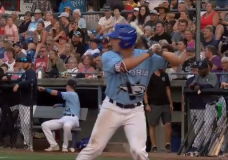