WATCH: After a controversial penalty shot put the Victoria Highlanders on the upwards climb, two goals in the second half lifted the Highlanders to a 2-1 win over the Seattle Sounders U-23 squad at Centennial Stadium last night.

Santiago Patino would draw the penalty in the Victoria box, and after being denied on the penalty shot by Highlanders netminder Nolan Worth, the Sounders attacker would score on the rebound to give Seattle a 1-0 advantage going into halftime.

But Victoria would respond in the second half, in the 61st minute, a Victoria corner kick would find it’s way to Marcus Campanile, he would boot the ball past the Sounders keeper to tie the score at one.

Then, in the 84th minute, the Highlanders get a big time goal. Cam Hundal would be denied on the first kick on the rush, a second attempt on goal would be blocked by a Sounders defender, but Mitchell Popadynetz would bury the third attempt for the game winner, as the Highlanders earned their second victory of the season with a 2-1 final over the Sounders U-23 squad. 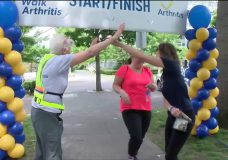 Walk for Arthritis in Victoria raises $16,000 for disease prevention