November 14, 2019 updated
CHEK
WatchA Victoria Mcdonald's employee says he's been told by his employer not to greet customers with 'hello, bonjour' after receiving complaints from several customers about his use of French. April Lawrence reports.

A few months ago, McDonald’s Hillside employee Archer Kuklev thought he would mix up the standard greeting with a little French.

“Hello, bonjour, welcome to McDonald’s,” Kuklev says is how he started greeting customers just before summer.

And he says customers at the Hillside location seemed to like the bilingual greeting until one customer complained.

“I said hello, bonjour and I got a response, ‘this is B.C. if you want to have business here you have to speak English’,” and he says the customer then complained to his manager,” Kiklev said.

Kuklev, who moved to Canada from Russia as a child, said it’s important for him to be inclusive.

“I understand being a language minority,” he said. “I do want to help people that come from Quebec they want to feel like they’re still part of Canada, they haven’t just crossed into a different country.

After a few more customer complaints, Kuklev says his managers told him not to use French any longer. And he has reluctantly obeyed.

“I don’t think Canada stands for just English or just French, we are bilingual from shining sea to shining sea,” Kuklev said.

At the Victoria Francophone Society, they are disappointed to hear any business discouraging the use of the French language.

“I think maybe this is just a mishap, a miscommunication, I’m hoping but it’s kind of, I’m kind of annoyed,” said Casey Edmunds, who is also executive director of the Canadian Francophone Games 2020 which will take place in Victoria.

“What harm is it doing to ask someone ‘allo bonjour’? They do it at the airport every day, I think we should be open to other languages, and especially Canada’s official languages,” Edmunds said.

The franchisee of the Hillside McDonald’s refused to comment on the story, and CHEK News did not receive a response from McDonald’s Canada’s head office.

Kuklev says if it is the company’s policy to only greet people in English-speaking provinces solely in English, it’s time to change it. 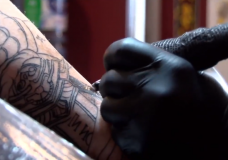