Posted: Oct. 28, 2019 5:46PM
CHEK
Watch In Character Costume and Novelties has Halloween stores in Victoria, Nanaimo, and Courtenay this year, and business is brisk.

Halloween and the weeks leading up to it are a big deal for retailers and can take the scare out of spooky fall financials.

Whether it’s a big box store or a pop-up costume store like ones in Courtenay, Nanaimo and Victoria, there are no shortage of places to find that perfectly frightful alter ego for Halloween.

“Halloween continues to be strong, it’s the second busiest season of the year,” said Stephen Kass, owner of In Character Costumes and Novelties. “Of course online shopping has become our biggest competitor in the past but we’re holding our own and we’re still plugging away.”

Popular this year are blow-up costumes like dinosaurs and bananas, while children are interested in superheroes and scary outfits.

“Contact lenses are a really big thing in the last few years,” said Kass. “A simple costume to have but tremendous impact that it gives.”

Ten-year-old Holden has been on the lookout for an alien costume and he found just the perfect one Monday in the Courtenay store.

His family is looking forward to Halloween.

“Yeah everyone gets pretty excited, carving pumpkins and we went to one haunted house at the Link which was pretty exciting, pretty spooky,” said Genevieve Clayton.

And if you’re out trick or treating you might just find Pennywise giving you your candy.

“I just want to dress up for the kids and show them a good time at Halloween,” said a man dressed in the costume. “You know it’s supposed to be a scary time of the year so you can’t get more scary than Pennywise right?” 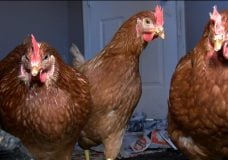 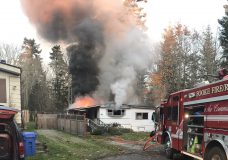 Mobile home likely to be torn down after fire in Sooke