October 29, 2019 updated
CHEK
WatchA pair of brazen bears in Port Alberni's Beaver Creek area has residents on alert and one farmer has even moved her flock into her home, to prevent further attacks on them.

“It is bizarre,” said Kristensen.

The Port Alberni area farmer has moved her 22 chickens into her home in an effort to outsmart a brazen pair of hungry black bears. The bears, which have had the Beaver Creek area on alert for weeks, broke into her Port Alberni area barn on Oct. 22 and ate 15 of her chickens.

“It’s a temporary solution for sure.”

The barn is just 150 metres from her home, but she now drives out there by truck.

She is still worried about the bears, after finding the trail of feathers and a bear walking out red-handed. She did call a conservation officer about the encounter.

“And he said ‘I can assure you he’ll be back today,'” said Kristensen about reporting the bear.

“Because he’d gotten into the freezer, there were attractants here and of course the birds. So they’re getting more aggressive. They’re not afraid of us.”

Kristensen said a week earlier her Saint Bernard dog came in badly shaken up and injured.

She is still on the mend.

At the Beaver Creek Market down the road owner Michael See said the bears also killed one woman’s cat. Two neighbouring farms chickens were attacked and fences and garages have been damaged as well.

“Killed off their chickens and even killed off one of the neighbour’s cats,” he said.

Conservation officers are now urging area residents to remove fruit from trees that has been attracting the bears and to put up electric fencing around livestock to keep bears out.

Kristiansen is now taking those measures since the heavy doors on her barn have proved no match for the bears that now have a taste for her chickens. 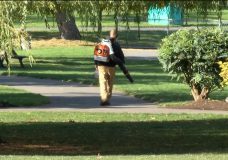 Blowing up controversy: Should gas leaf blowers be banned? 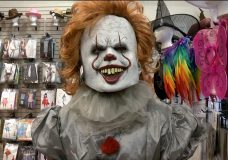