Its called ReFind Art, where 31 local artists were called on to create something out of discarded household items and building materials

All of the proceeds from the sale of the works goes to building homes for local families in need.

“I think it’s important that as designers we show what can be done,” said Tracy Yerrell.

“Whether they’ve been worked with a fairly classical style, or you just  create something that is is whimsical and just fun.”

Over the next two weeks, the public is invited to drop by the lower level of the Bay Centre where they can bid in a silent auction

The public can also donate to vote for their favourite pieces, the winner will receive the People’s Choice Award.

All artwork is also available for online viewing and bidding at habitatvictoria.com

The event runs from May 29th until June 10th. 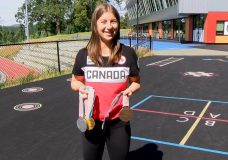 Police seek witnesses of an assault in Courtenay in March 2007