On Friday, Statistics Canada released a startling look at what the economy looked like from April to June. It was the worst posting for the economy since records began.

Real gross domestic product shrunk at a rate of 38.7 per cent, and some of the hardest hit were tourism and service industries.

The South Island Prosperity Partnership has just released its economic recovery dashboard looking at factors like unemployment, hotel occupancy, BC Ferries ridership and flight numbers in the region. Compared to 2019, the numbers are still bleak.

“There is some activity happening but it’s just not enough to call it an economic recovery,” said Dallas Gislason, director of economic development for the South Island Prosperity Partnership.

“We are sort of out and about and allowed to go out with friends a little bit and stuff like that, so it makes sense that the data showed a little of a bounce-back. At the same time, we see hotel [occupancies] in June were 21 per cent compared to 90 per cent in 2019. That’s a drastic difference, even though two months ago they were at six per cent.”

The dashboard can be found here.

Passenger numbers at Victoria International Airport have shot up from 4,261 in April of this year to 13,467 by June.

The toughest season, the winter off-season, is now also just around the corner.

“We are definitely going to see some business closures and bankruptcies, unfortunately, as businesses try to hang out through the Christmas season,” Gislason said.

The organization has recommended multiple solutions for every sector, one being encouraging spending in the city, and avoiding large corporations like Amazon. They applaud federal and provincial programs helping businesses, and encourage ore programs to be put in place.

Back in April, everything on two wheels at Cycle BC Rentals and Tours was locked up due to the pandemic.

“There was a ton of uncertainty, just wondering whether it was was a couple of weeks or a couple of months or if the whole season was cancelled,” said manager Ander Gat.

After six weeks they and others opened back up, but the damage was already done.

“A lot of local traffic and now a lot of inter-provincial tourism as things have gotten busier but still a lot of uncertainty and we are still going to be greater than 50 per cent down for the year,” he said.

Cycle BC says they will still be able to make it through the winter.

As for how many others across the region won’t make it, will only be clear come spring.

Your Money for August 28 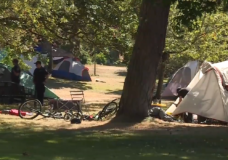