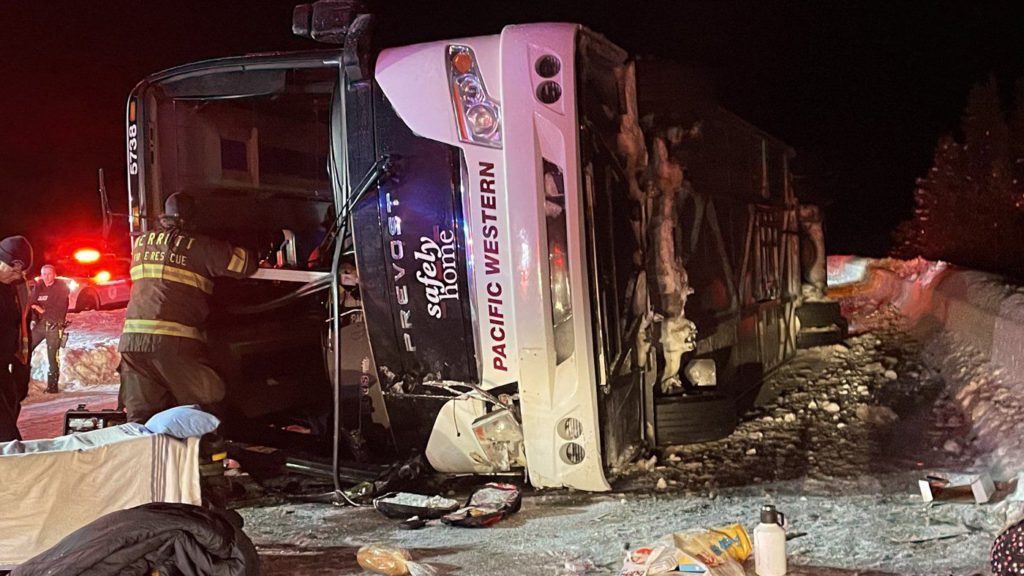 THE CANADIAN PRESS/HO, Bill Gerber
First responders look over the scene of a bus crash on Highway 97C Okanagan Connector between Merritt and Kelowna in this Saturday, Dec. 24, 2022 handout photo.

On Christmas Eve, a bus travelling on Highway 97C Okanagan Connector east of Merritt near the Loon Lake exit crashed.

Four people died in the crash, and the number of people on the bus is still being confirmed. RCMP say it is believed a total of 46 people were on board, however Interior Health says 52 patients were admitted from the crash.

Rob Fleming, the minister of transportation and infrastructure, says there were no other vehicle incidents reported on that stretch of highway on Christmas Eve.

“Road conditions observed immediately following the incident were within the specification set by the ministry for winter road maintenance,” Fleming said.

In a media availability, Fleming mentioned several times Drive BC had issued warnings earlier in the day urging drivers to drive with caution or to avoid the road.

When asked by Ashley Joannou from The Canadian Press whether this meant the bus should not have been travelling on this highway, Fleming said this is a question that may be part of the RCMP and CVSE investigations.

“The advisories we gave were to think about travel and whether it was necessary or not, and obviously the reduced congestion of passenger vehicles is a good thing where possible a lot of people have small light vehicles without proper tires that really don’t cope well with winter road conditions,” Fleming said.

“Commercial vehicles involved in goods movement in the trucking sector, transporting people through the passenger coach industry are prepared for winter conditions. The advisory was to warn about the road conditions which were winter conditions, and I think there will be some parts of your question that are definitely part of the investigation into this tragic crash.”

BC RCMP released a statement saying the bus was the only vehicle involved in the fatal crash.

“The E-bus went off road left, crossed the median and flipped onto its passenger side coming to rest in the eastbound lanes,” the RCMP statement says.

“Passers-by and local residents provided assistance by allowing passengers to warm up in their vehicles and providing blankets while emergency services arrived. All passengers were transported by BC Ambulance Service to local hospitals.”

RCMP says while the bus was equipped with seat belts, the majority of passengers were not wearing them.

“The passengers were a mix of local, non local and foreign nationals. This was a regularly scheduled commercial bus trip from Kelowna to Vancouver,” the statement says. “The road conditions were fluid, transitioning from clear wet roads to frozen with ice and snow on the road surface due to the time of day (sun setting) and changing weather conditions. Rain and hail was falling.”

RCMP continues to investigate, and is working with E-bus to return luggage on board the bus to passengers. The bus remains in RCMP custody.

Anyone who witnessed the crash is asked to contact Cpl. Samantha Audley by email at [email protected].

Kelowna resident Gord Vizzutti says he bought an Ebus ticket for the same route on Dec. 20 and described harrowing and icy conditions that also resulted in a less serious crash.

He says the bus he boarded appeared to have been contracted from a different operator.

Fleming says investigators are looking at both incidents, but don’t have answers about the cause of the Christmas Eve crash yet.

“There’s a lot of questions … We must let the investigators do their work,” he said.

Truck driver Kalwinder Singh says he knows the road well, and regards it as among the worst in North America.

Singh was supposed to meet up with his cousin, Karanjot Singh Sodhi, for a family celebration to ring in the new year.

Instead, Singh said he will be picking up the remains of his relative who died in the Ebus crash east of Merritt near the Loon Lake exit. Officials have not released the names of those who died.

Forty-one-year-old Sodhi, who was a new arrival to Canada and was from Punjab, India, leaves behind a wife and two children, a six-year-old son and two-year-old daughter, in his home city of Amritsar.

The cousins were on an hour-long video call that Singh believes ended about 30 minutes before the crash. They laughed and joked, discussing Sodhi’s upcoming visit to Surrey, and the party they were to have.

Around 10 p.m., when Sodhi didn’t reach Surrey, Singh said his wife began to worry. Sodhi wasn’t answering his phone either.

About an hour later the family got word of a bus crash on the route their cousin was travelling and that some people had died.

Singh said that’s when he began calling hospitals in the area to check if his cousin was among the dead.

On Christmas Day, he said the police called him to say his cousin was one of the victims.

“(Sodhi’s) wife is in a very bad shape after hearing the news. His mother too.”

Singh, a long-haul truck driver, said the stretch near the site of the crash along the Okanagan Connector, also known as Highway 97C, is treacherous.

“The B.C. government don’t clean the roads,” he said. “It’s so slippery. If you go to Hope to Kamloops and Kamloops to Golden B.C., to Highway 1 to Calgary — the worst highways I’ve ever seen in the U.S. or Canada.”

The stretch between Kamloops and Golden, B.C., which is about 300 kilometres long usually takes six hours in the summer while it takes about twice that in winter, Singh said.

“I saw so many accidents in just the last two weeks.”

Vizzutti and his wife, Patricia Rockwell, bought an Ebus ticket and were on the Okanagan Connector after leaving Kelowna around 7 a.m. Dec. 20. The Kelowna man described a harrowing trip where near-whiteout conditions blanketed the steep and icy highway.

“Within minutes we felt the bus slip, slide a bit and my wife commented that we almost hit a guardrail,” he said.

His wife texted their son in Vancouver saying she was not comfortable in the bus. About 45 minutes later he said the driver nearly rear-ended a pickup and swerved sharply, missing it by centimetres.

“There was an audible gasp from those in the bus. The driver turned around and he said, ‘is everyone OK?’ And my wife Patricia responded, ‘well, we’d be better if you could just slow down a little bit.'”

About 20 minutes after that the bus clipped a semi-trailer truck.

Vizzutti said his wife suffered a gashed forehead, glass in her eyes and mouth, bruises and a concussion.

They were travelling to Vancouver where they planned a brief stopover before heading to Arizona to celebrate Christmas in the sunshine with family.

“But of course that didn’t happen.”

He and his wife had resolved to chalk up their bus crash and ruined Christmas to experience and just deal with their wounds, he said.

“I was happy to remain in that state until on Christmas morning, I woke up to read the news of this horrific bus crash by the same bus company on the same stretch of road. One that of course had produced significantly far worse effects, and our hearts were just torn apart.”

His message to the Ebus drivers, Vizzutti said, is to “slow down.”

“I would say for heaven’s sake, just pull over and wait for conditions to improve or if conditions are that bad, and you’re aware of it at the outset, just simply don’t,” he said. “Don’t leave, stay put.”

Alberta-based bus company Ebus paused all its bus routes in B.C. on Boxing Day “due to deteriorating weather conditions,“ according to a statement posted on social media.

The company did not immediately respond to a request for comment.

While he is fine physically, Vizzutti said “mentally, it’s a whole different story.” He says he won’t be taking a bus any time soon.

He cannot imagine the mental health of those on the bus that crashed Christmas Eve, killing fellow passenger, he said.

“A life-altering event for so many people. That’s for certain.”

Among them are Sodhi’s loved ones. Singh described his cousin as a “very nice man” who always got his three-year-old son a gift when he visited and played with him.

Singh said Sodhi’s father died when he was 13, leaving his mother to raise him and his sister.

“Now his children are without a father.”

“Although the number of patients remaining in hospital is low, this is a life-altering incident for all involved, from the initial physical injuries to the emotional and spiritual impacts of an incident such as this,” Interior Health said in a statement on Sunday. 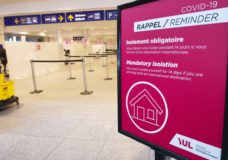 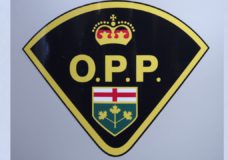