November 19, 2020 updated
CHEK
WatchRecreational divers realized massive industrial tires were trapping and leading to the death of hundreds of crabs in Chemainus Bay.

In Chemainus Bay on Wednesday, Royal Canadian Navy divers pulled four massive industrial tires up from the bottom of the bay.

The tires were death traps for crabs.

“I can’t really say but 1,000 and new crabs being added all the time,” said Doug Biffard, a recreational diver, when asked how many crabs the tires had killed.

The effort is happening thanks to Biffard and another recreational diver watching from shore.

The tires are thought to have come off some barges that sank in 2012 but it was just last year the divers realized they were trapping crabs leading to their death.

“I saw crabs on top of the tire almost ready to fall in, so I could tell right away that it was a continuous process of crabs getting caught in these tires and perishing because they can’t get out,” said Bifford.

“That’s a lot of needless death and my thoughts go to the wolves and octopus and everything else around here that eats crab and all the interconnectedness of everything,” said Kathleen Fenner, the other diver who helped with the report.

The divers wrote a report which caught the attention of the government this past spring.

“It’s important to have that sort of debris removed from the ocean. There’s a lot of evidence also that these tires can leach contaminants into the water for potential periods of time,” said Chrissy Czembor, a restoration biologist with Fisheries and Oceans Canada.

Fisheries and Oceans, the Halalt First Nation, the Municipality of North Cowichan and the Navy Divers were involved in bringing the tires out of Chemainus Bay. Tire Stewardship BC and Kal Tire are making sure the tires get recycled.

“A pretty phenomenal collection of people to come and get this done,” said Czembor.

“It’s not typical for us but it’s kind of a feel-good project,” said Lft. Navy Mike Allport, with the Canadian Navy Fleet Diving Unit.

Fenner and Bifford are thrilled.

“I’m really excited because there have been so many hurdles you wonder if it’s actually ever really going to happen,” said Fenner.

They say today is a win for the environment.

Earlier this year invasive crabs made headlines when they started showing up in traps on the west coast of Vancouver Island in alarming numbers. 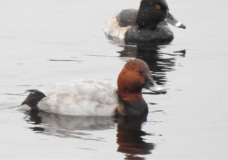 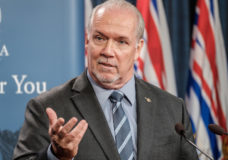 Horgan claims B.C. is transparent as anywhere in North America with its COVID-19 data, but is he right?