Posted: Jul. 22, 2022 7:27PM
CHEK
WatchA four-month-old eaglet that became an unlikely sibling with a tiny hawk chick that was dropped into an eagle's nest on Gabriola Island has died.

A four-month-old eaglet that became an unlikely sibling with a tiny hawk chick that was dropped into an eagle’s nest on Gabriola Island has died.

The eaglet, affectionately named ‘Junior’ by thousands of followers who have been watching on a webcam, was found electrocuted at the bottom of a power pole.

Sharron Palmer-Hunt, director of Gabriola Rescue of Wildlife Society (GROWLS) and eagle cam monitor, said there is no question it was Junior who died.

“Definitely, this was Junior because he hasn’t been back to the nest in a week,” said Palmer-Hunt.

Junior — and his parents — captured the attention of many around the world when he suddenly became siblings with a tiny hawk chick that was dropped in by the mother eagle as food.

Yet, Junior did not eat the tiny hawk, which has been named Malala after the famous Nobel Peace Prize winner. The parents have started raising it alongside Junior, even though he dwarfed the hawk in size.

Even longtime wildlife rescuers on Gabriola Island were shocked by what happened.

“This was very unusual to me and I thought it was very unique,” said Iain Lawrence a GROWLS member who has been rescuing wildlife on Gabriola Island for 20 years.

Many are now upset that Junior became the second eaglet to die after hitting power lines on Gabriola’s South Road in two years.

“It was very hard for people. A lot of comments,” said Lawrence.

According to GROWLS, BC Hydro was already planning to install protective covers on these lines to save birds that would otherwise collide with them, and officials say that is being fast-tracked now.

With Junior’s death, Malala is, remarkably, the last living chick in the eagle’s nest, and relieved rescuers say her future is looking bright. Malala has already been seen bringing food back to the nest and acts surprisingly like an eagle even as she becomes a full-grown hawk, according to GROWLS. 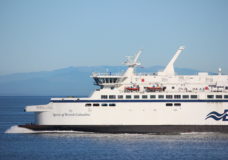 Rob Shaw: Firing of BC Ferries CEO signals that direct political control has returned to the ferry corporation 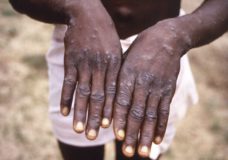