Posted: Mar. 10, 2020 6:28PM
CHEK
WatchThere has been plenty of debate over off-leash dogs on Saanich beaches and whether they should be banned. Now, Saanich parks are being included in that discussion with the Friends of Mount Douglas Park Society calling on dog owners to respect leash laws. Jasmine Bala has more.

The Friends of Mount Douglas Park Society are cautioning dog owners to be more responsible and to obey laws in the park.

“Dogs need to be under control, that’s the bottom line,” said Donna McGhie-Richmond, a member of the Friends of Mount Douglas Park Society. “Whether that takes a leash or whether that takes you having a really well-trained dog, then that’s your choice. And if that’s not the case, then it’s inevitable that we will have leash laws on Mount Doug.”

Most Saanich parks allow dogs to be off-leash, including Mount Douglas, as long as they are under effective control. This means they should be in the owner’s line of sight and they must come when called.

Last week, McGhie-Richmond had an incident where an off-leash dog ran in front of her while she was running down Mount Doug. She tripped and fell onto the pavement, bruising her hip and ripping her jacket.

If something similar happened to a child or senior, she noted, it would have been devastating.

These concerns are already on the city’s agenda, with Saanich council set to vote on banning off-leash dogs on beaches this summer.

“Yes, there are dogs that are out of control and yes, those dogs should be leashed,” said Niki Green, a dog owner. “So I don’t think it’s one thing fits all.”

Another dog owner, Denise Power, said the majority of people do follow the rules, adding that it’s unfortunate that some don’t.

“I think that the dogs generally are well behaved,” she explained. “Yes, there’s always one or two that ruin it for others, but it will be devastating for the dogs not to be able to have the use of this land like we do.”

McGhie-Richmond said she hopes dog owners will follow the rules, so the park will continue to be a playground for pups and everyone else. 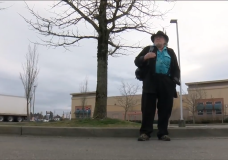 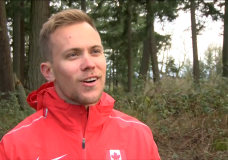