Thirty-five people who were living on the streets of Victoria just a few weeks ago are now being housed at Paul’s Motor Inn but the motel’s manager says it hasn’t been smooth sailing.

Ian Powell, who also runs the Inn at Laurel Point, says he offered up the rooms to vulnerable people because he wanted to help the community out during the pandemic.

But he says the past three weeks have been fraught with challenges including vandalism, theft and abuse toward his staff. He says half a dozen people have had to be removed and he questions whether hotels are the appropriate place for people with such severe mental health and addiction issues.

BC Housing and the City of Victoria have secured nearly 200 motel rooms, including several at the Howard Johnson on Gorge Road but still the tent city on Pandora Avenue persists.

On Thursday, Victoria city council voted to ask the province to use its emergency powers to start seizing hotel rooms to house the city’s most vulnerable.

But the hotel association is pushing back.

“Many of the hotels in Victoria are still open, many of us are trying to keep as many people as possible as we can employed, so we have concern of the safety of our own staff, the safety of guests in our hotel and then the safety of the building as well,” said Hotel Association of Greater Victoria Chair Bill Lewis.

Even those who work on the front lines say hotels might not be the solution for everyone.

“Unfortunately this audience, the people we work with every day, the level of their illness is intense,” said Our Place Society Director of Communications Grant McKenzie.

“If this was about poverty we could solve it instantly with hotel rooms, sadly it’s about mental health issues, and addiction issues, and even physical injury issues.”

McKenzie suggests instead the province seize vacant buildings in the city, like the former Canadian Tire on Douglas and set up temporary indoor shelters staffed by support workers.

BC Housing said it’s in contract negotiations with several other motels and is also in the process of securing a location for an emergency response centre, that would provide more spaces for those who need it most. 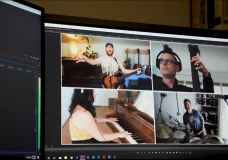 Rock for Relief: How the ensemble was put together