Noel Frayne loves to get out in the outdoors and one of his favourite pastimes is paddling at Thetis Lake.

But what he recently discovered at the popular lake has shocked him.

“I was out paddling the lake, which I do regularly, and I saw a dead deer, which I thought was unusual because it was in the water,” Frayne says.

Frayne notified the CRD about the carcass. But a few days later, he spotted two more dead deer in the water — both smaller than the first and one looked like a fawn.

“If they die in the bush they’ll just go back to nature, I understand that, but why would three deer be in the water dead, which really seemed unusual,” Frayne says.

The mystery deepened on Sunday when he found a partially-submerged dead beaver.

MORE: CRD warns people not to swim at Thetis Lake due to algae bloom

That’s a total of four dead animals in the water — all in the span of just two weeks.

“Was it a natural death?” Frayne asks. “That’s what’s concerning me. Why? What killed them? Is it a hazard of some kind to people at the lake or dogs going swimming?”

No one from the CRD Parks Department was available for an interview but they told CHEK News staff are trying to locate the carcasses to remove them from the lake.

Depending on the condition, necropsies will be performed and BC Conservation will try to determine the cause of death.

All of the animals were found close to shore.

The deer were in the lower lake towards the dog beach and the beaver was in the upper lake.

Frayne took photos to document what he found and says they didn’t have any visible wounds.

He’s never seen any dead animals in the lake before and he’s worried it could be related to recurring blue-green algae issues at Thetis.

But officials say toxins in the water likely wouldn’t act that quickly.

He just hopes officials are able to solve the mystery soon. 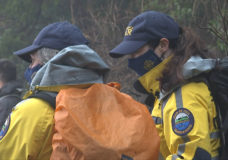