A record number of people are using food banks across the country, according to Food Bank Canada’s annual Hungercount.

“Food Banks Canada’s HungerCount 2022 report is a devastating wake-up call for all people living in Canada and our governments that we must take action to Starve the Hunger that is destroying communities and lives,” Kirstin Beardsley, CEO of Food Banks Canada, said in a release.

“The lineups start at 8 a.m., so those people are waiting in line for about two hours for their weekly food supply,” James explained.

The Mustard Seed serves about 5,000 people per month, and its food distribution centre also rescues food from grocery stores for about 70 organizations across the Greater Victoria region.

James says this food gets distributed not only to low-income or unhoused people but also to middle-income residents and families.

She added with the holiday season around to corner, the demand will increase even more.

The Hungercount 2022 report laid out recommendations for the federal government that it believes would help lower the demand on food banks.

“We need to work together to make true and lasting change by pursuing a dual focus strategy that creates a minimum income floor for our most vulnerable populations while working to address affordable housing, [employment insurance] reform and new supports for Northern and remote parts of Canada,” said Beardsley.

James said it also helps when the community supports local organizations by donating food and money, adding that monetary donations are the most helpful.

“Our buying power is such that we are able to buy specifically for people versus giving what we’ve just been given,” James explained. “Even $5 or $10 dollars goes a long way.”

She added that normally, a lot of donations come in during the holiday season, which helps keep food supplies up through the winter.

Yet in the summer, donations slow down, so she’s encouraging community members to continue donating year-round.

Donations for the Mustard Seed can be made on its website. 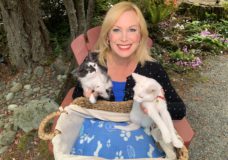