The impact of Monday’s intense flooding on Vancouver Island was felt farther north as well.

Some people had to evacuate their homes as floodwaters rose while others were calling plumbing and drainage companies to help them deal with flooded basements or yards.

With heavy rains and the tide rising, Heather Rathburn was not taking any chances. She used her kayak to get her dog and herself out of Parry’s RV park. She wanted to leave before the power shut off.

“It’s not off as we speak but the water levels are rising. At a certain point, it will automatically shut everything off to be safe,” said Rathburn.

By Monday afternoon, the Regional District of Nanaimo called on search and rescue to help those living in the trailer park.

A similar situation also happened north of Qualicum Beach where firefighters were helping get people out of a campground near Little Qualicum River.

“We estimate between 40 and 60 residents need to be evacuated out of the campground so we’ve got about 15-20 out right now and our crews have just gone in to evacuate the remainder of the folks here,” said Chief Nick Acciavatti of Dashwood Fire Department.

Tanner Elliot was among those fortunate enough to be able to drive out.

“I hope people have trailer insurance cause there are definitely a few that aren’t making it out. I know a lot of people in the top row aren’t moving at all so they’re just getting their cars and going to stay with family and stuff,” said Elliot.

“We’ve gotten over 100 this morning,” said Spencer Sigouin, of Roto-Rooter in Parksville.

Many of the calls were from people not necessarily living in low-lying areas.

“Just about anybody that’s got a house with a basement or crawl space is experiencing some sort of water intrusion into that area, doesn’t necessarily mean that you’re close to a river,” said Sigouin.

Those impacted are now left wondering how much damage today’s storm left in its wake. 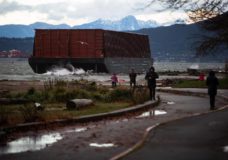 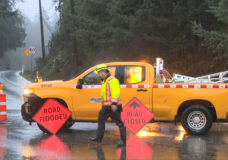