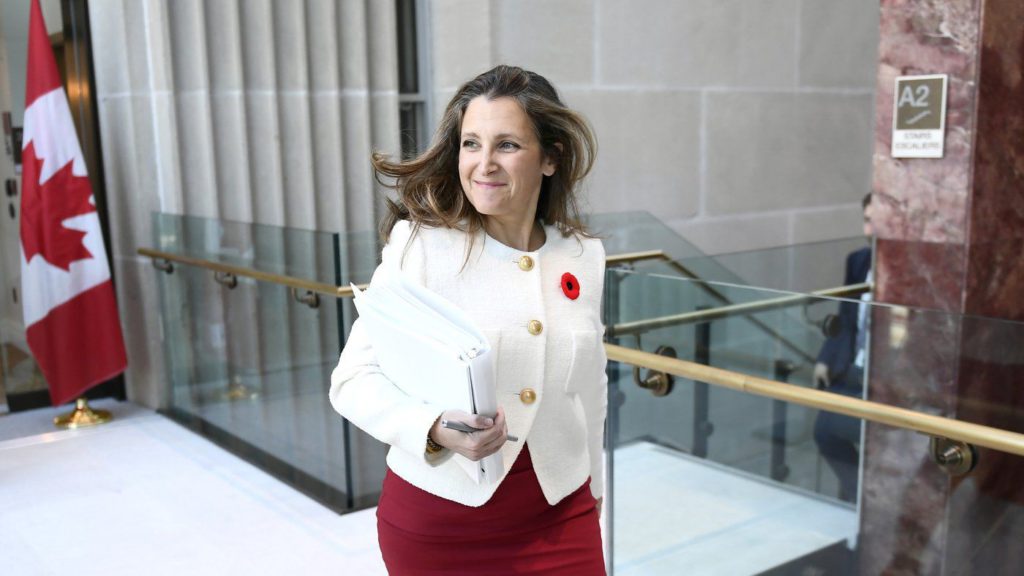 THE CANADIAN PRESS/Justin Tang
Deputy Prime Minister and Minister of Finance Chrystia Freeland arrives for a news conference before tabling the Fall Fiscal Update in Ottawa, on Thursday, Nov. 3, 2022.

But beyond the top-line debt projections and the analysis of how Canada seeks to soften the impact of a potential recession, the fiscal update offers key details that shed light on Liberal priorities.

Here’s a look at five highlights.

The Liberals are expecting to spend $1 billion in the current financial year toward provincial requests related to post-tropical storm Fiona, which savaged Atlantic Canada and eastern Quebec in late September.

That figure is on top of the $300 million over two years that the feds announced in early October in the wake of the devastating storm, and its month-long matching of donations to the Canadian Red Cross.

The new money is expected to cover requests from provinces under the Disaster Financial Assistance Arrangements, under which the federal government covers up to 90 per cent of eligible provincial expenses in the three months following a disaster.

In last spring’s budget, the government announced an accelerated deadline for $33.5 billion in public infrastructure projects that had been promised in 2017. The fall statement says $23 billion has been approved so far for 5,200 projects submitted by provinces and territories.

While territories have until March 2025 to allocate the money, the provincial deadline is March 2023 — otherwise the money will be reallocated.

Alberta and Manitoba only have one per cent of their funding envelopes left, representing $50.5 million and $13.6 million respectively. And though Ontario has used up all but four per cent, that still represents a significant amount of money at more than $450 million.

On the other end of the spectrum, Quebec is the biggest laggard, with 37 per cent of its envelope or $2.75 billion still available. The next-biggest amount is British Columbia’s $661 million, representing 17 per cent of its share.

The financial statement contains an announcement that consultations are launching right away — the same day as its release Thursday — on digital currencies “including cryptocurrencies, stablecoins and central bank digital currencies.”

Canada’s fiscal framework needs to keep pace with the rise of the currencies and how the digitization of money is “transforming financial systems in Canada and around the world,” the document says.

And the government is also seeking to understand the challenges digital currency poses to democratic institutions, with some types of crypto being used to avoid global sanctions and fund illegal activities.

The new consultations follow a legislative review announced in last spring’s budget. They also follow attacks on new Conservative Leader Pierre Poilievre for his suggestion during the Tory leadership campaign that cryptocurrencies could help Canadians “opt-out” of inflation — an assertion that Liberals have ridiculed after the value of cryptocurrencies plummeted earlier this year.

In a separate process, the Bank of Canada has studied the potential for a central bank digital currency. It has said it doesn’t anticipate the need for it right now but wants to be prepared if that changes in the future.

Individual truckers may have formed the genesis of the “Freedom Convoy” protest that descended on Ottawa last winter and prompted the Liberals’ use of emergency powers to clear protesters — a decision currently being scrutinized at a high-profile public inquiry.

But Liberals are signalling their support for the industry with their mini-budget, putting $26.3 million over five years toward orders, fines and prosecutions against non-compliant trucking industry employers.

The money seeks to address the ongoing issue of companies having truck drivers self-incorporate and operate as independent contractors instead of being classified as employees. This denies them labour rights including paid sick leave, health and safety standards and employment insurance and pension contributions, the document says.

The Canada Revenue Agency is also working to “encourage greater awareness” and “foster compliance” with tax rules that govern the use of incorporated employees, something the feds say they will elaborate on in next spring’s budget.

The fall statement unveils the amount of funding Liberals expect to put toward a new immigration strategy they unveiled earlier in the week.

On Tuesday, the government announced that it will seek to increase immigration to record levels, bringing in 500,000 arrivals in 2025. Liberals plan for the majority to be skilled workers who can help fill labour shortages in healthcare, manufacturing and the building trades.

Support for the processing of applications and settlement of new permanent residents will cost $1.6 billion over six years and $315 million in new, ongoing funding, the fall statement says.

With Liberals facing criticism for bottlenecks in Canada’s immigration process, another $50 million will go toward the immigration department in the current fiscal year “to address ongoing application backlogs, speed up processing and allow for skilled newcomers to fill critical labour gaps faster.” 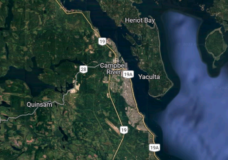 Gas leak in Campbell River prompts evacuation of nearby hotels 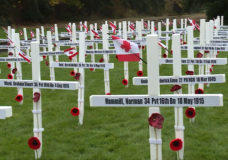 'There were sacrifices made': Field of Crosses, poppy displays for Remembrance Day